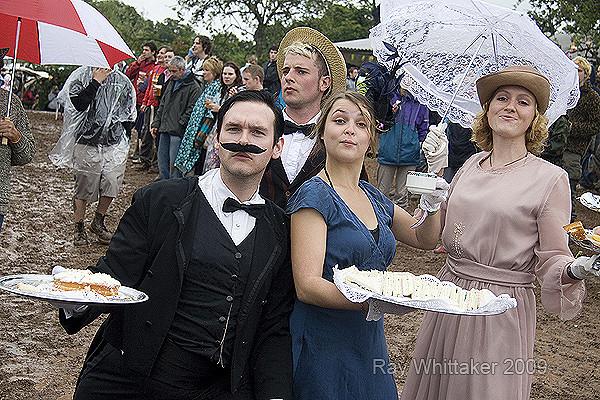 2009: The Year of Eccentricity

Nozstock has flourished from a barbecue of friends, singing and dancing on the lawn in 1998 to a fully-fledged festival of eight stages and sights and sounds of every variety.

Somme-like mud was no contender for Nozstock 2009!

Despite one of the greatest downpours of the past few years, Nozstock Festival’s punters couldn’t take the smiles off their faces during 2009’s festival, with the atmosphere of frivolity and excitement lasting throughout the weekend. ‘Nominated for four UK Festival Awards last year, it really has plenty to offer, and deserves all the accolades it gets,’ claimed Virtual Festivals’ Jamie Skey.

Not only were crowds driven to dance by punk legends Buzzcocks, pulling off ‘a storming set of their unique art rock pop songs … all at a volume so loud that you can see the mud wobbling’ (Martyn Goodacre, Esquire), but dance fiends were treated to explosive sets by Andy C and Rusko, who both played over their alloted times, addicted to the receptive crowds.

The homely 17th century farm in Herefordshire hosted eight stages and endless hidden idylls of over 200 acts, ranging from strange and spooky performance art, through mesmerising dance to goose-pimple inducing sonic delights. Standing firm to our philosophy that Nozstock is a festival for festival-goers, 2009 impressed with some of the UK’s freshest trendsetters, talented musicians and deft turntablists.

Not only did the headline acts astonish at this year’s festival, but up and coming hidden talents gave crowds something to talk about, not least local favourites, hip hop officianados The Anomalies. Indie thirsts were quenched by The Joy Formidable pounding out the anthems, alongside Red Light Company, The Boxer Rebellion, Pulled Apart by Horses and Two Door Cinema Club. Alessi’s Ark inspired with her ephemeral acoustic-folk and dub-ska festival legends Babyhead got the crowd bouncing. Dance music lovers were spoilt for choice thanks to a bill including the Scratch Perverts with Dynamite MC, Krafty Kutz, London Elektricity, with Bristol-based psytrance kings Tribe of Frog presiding in the Coppice.

Also, the newest area to be added to the festival, in the form of La Rue de Plom, was well met by Nozstockers, who could sup champagne, gorge on scotch eggs and laugh to their hearts content all weekend long. Rob Deering crowd-surfed his way out of the comedy tent on a sea of appreciation and Dusty Limits compered an unforgettable night of burlesque darkness. And children were spoilt for choice with workshops and performances.

We have already started booking acts for this year’s shenanigans and it’s shaping up to be another unforgettable experience. Noz’s daughter Ella has said, ‘We’re keeping the intimacy and uniqueness of the site – that’s what everyone loves, the colour and the sense that the farm is everyone’s home for a weekend – but there’s no harm in getting in more high quality acts! Not just musically either – we want entertainment across the spectrum so there really is something for everyone.’