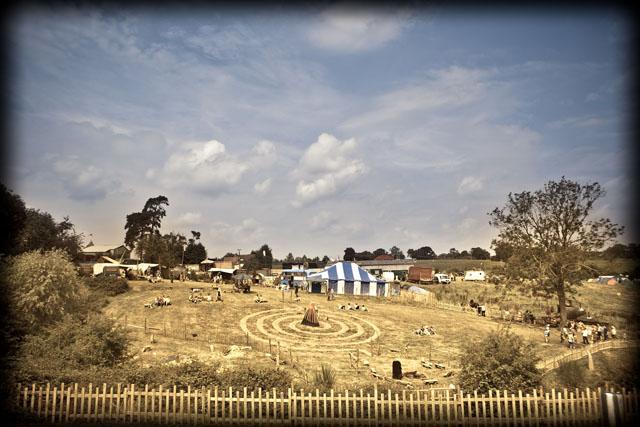 ‘..the most friendly festival I’d been to in years…a real mix of different people, ages and cultures.’ Creative Boom

Themed on Twisted Carnivale, Nozstock The Hidden Valley 2011, many have claimed, was the best year yet. Stripes abounded across the site with stages, shacks and punters equally adorned in their best carnival attire. The sun beamed weekend-long and every area pulsed with excitement amid a babble of anticipation.

Alabama 3 headlined the festival to great effect, bringing their party onto the stage and getting everyone swinging to their country blues techno, preceded by an amazing turn from those purveyors of festival magic, the Correspondents, sharing their drum-boosted swing beats and dashings of electronica with a footloose audience. Traditional hard-hitting rock-n-roll came in the form of the Jim Jones Revue and Vintage Trouble, both bands creating a stir at the festival with their toe-tapping, hair-swishing melodies. Plus a host of up-and-comers provided excellent quality billing throughout the weekend, meaning there was nowhere you could go on the farm without succumbing catchy beats.

Electronically, the festival did not disappoint, with Toddla T bringing his garage, dancehall mash-up to the Garden, and the Foreign Beggars got the crowds pounding with their skillfully-woven, bass-driven hip hop lyricism. New crew, Sika Studios, staged a takeover of the Bullpen with some friendly faces in the form of Fliptrix and Dirty Dike. There was literally no ‘keeping the noise down’.

Further experimentation was occurring over in the Dingle where the Bandstand hosted eclectic electro-acoustica, the cinema housed impromptu live visuals shows and animations for kids, and the theatre abounded with energy from keen workshoppers to the curious, particularly when the lights turned low for the after-dark cabaret.

Arts & crafts abounded across the site, folkies jammed round the fire, raucous laughter emanated from the comedy tent round-the-clock, and the excitement of kids playing and parading in the Kids Area was palpable. All-in-all, Nozstock lived up to its reputation for being a curious amalgamation of performance art, electronic supersounds and good-old-fashioned drum-bashing.