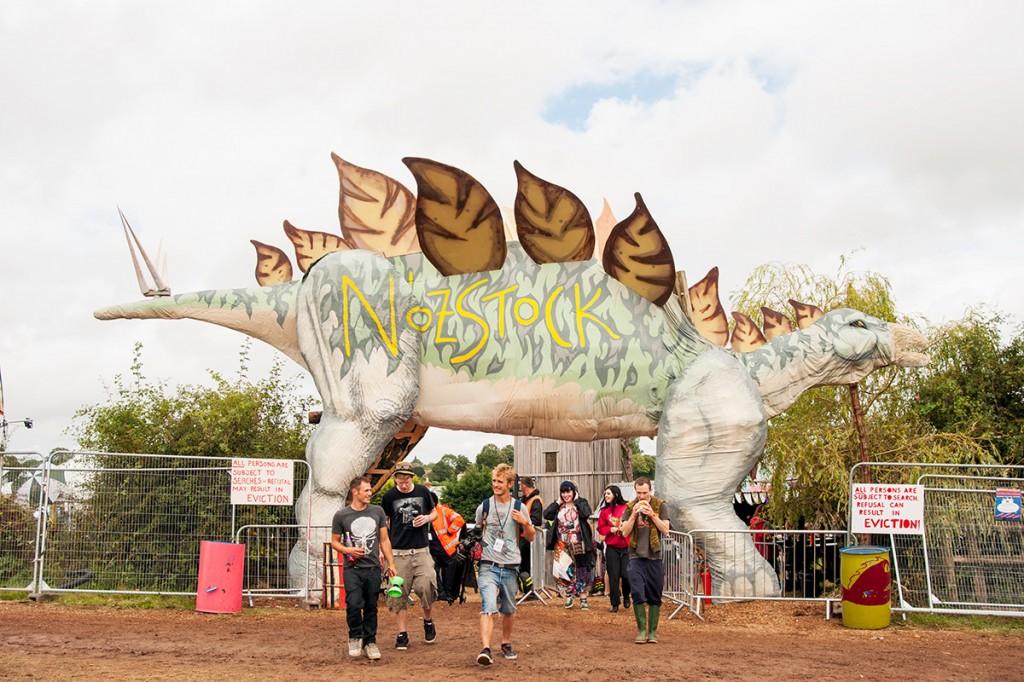 ‘Nozstock is a slice of whimsical mayhem cut from reality and folded neatly, hidden within the valleys of Bromyard in Herefordshire’

Another year, another Nozstock like no other. 2014 was the year of Jurassic Farm: The land that Noz forgot. The farm was transported back to the time when dinosaurs roamed the earth. Festival goers wandered unwittingly through a prehistoric paradise and between the legs of a giant stegosaurus that had parked itself at the entrance to the main arena. The Orchard stage was replaced by the face of a dinosaur, with glowing eyes and fearless bands performed in the vast chasm of its mouth.

Music-wise Roots Manuva and Fun Lovin Criminals gave fantastic headline performances on the main stage and The Heavy closed the weekend in style. Craig Charles was on top form, bursting with energy and bringing his renowned funk and soul party to the Garden Stage and Friction and T.C both gave sets to remember in The Cubicles. However, if you ask anyone who saw Molotov Jukebox’s Saturday night set, they would say they truly stole the show – widely hailed as the musical highlight of the weekend and they even planted a tree in our star-studded Celebritree Avenue!

New this year was the extended opening times which meant festival goers were welcomed onto the site on the Thursday evening. They were treated to a chilled start to the weekend, soaking up a tranquil summers evening and enjoying live folk music. Also new was the Nozslam performance poetry competition, where the best poets battled it out in the Tent of Temporary Thought to win money, tickets, a set in 2015 and of course eternal glory.

The 2014 comedy offerings were better than ever and the Laughing Stock tent was packed to the rafters with acts such as Josh Widdicombe and Cardinal Burns. Other highlights included the Marc Bolan T Rex flash mob which featured glitter and feather boas galore, Sunday night’s fire show and a Mexican funeral parade. This year’s festival received glowing reviews with one festival goer dubbing Nozstock “the best festival in the west (or anywhere)” (we agree!) and we are also very proud to have earned a Commended Award from A Greener Festival.