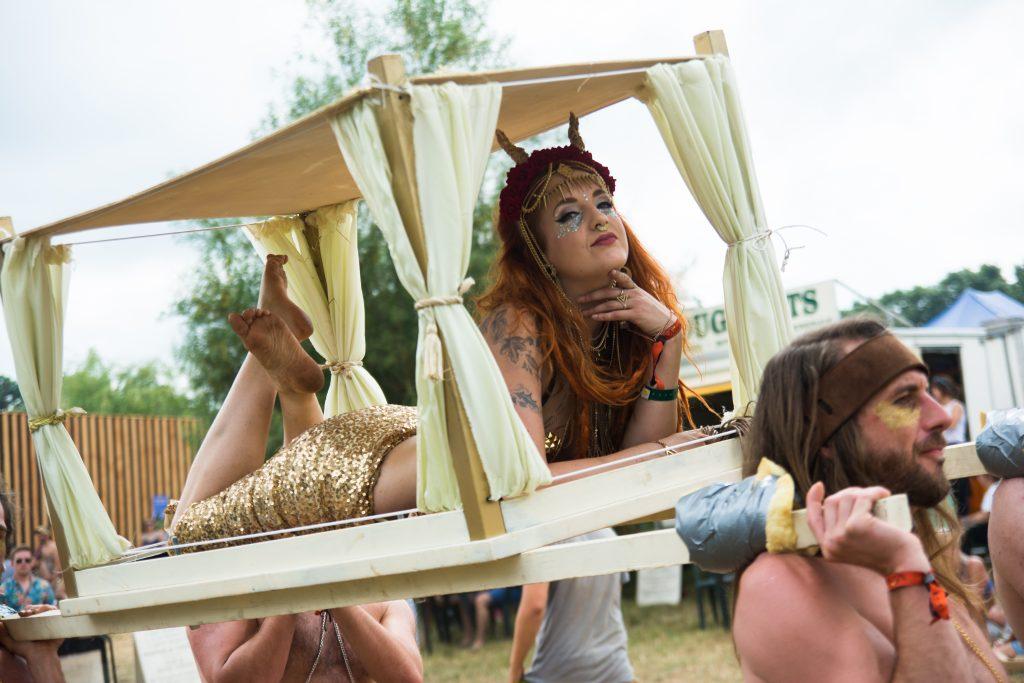 2016: Wonders of the Ancient World

‘The vibe was that of unity, a group of like-minded people had come here for one reason and that was to have fun’

The very same Sun that shone down on the Romans in their togas and Greeks with their grapes, transformed Rowden Paddocks into the eighth Wonder of the Ancient World for the weekend,Not to be outdone, however, Nozstock’s decor team gave our humble farm a bit of a makeover in 2016, with the Garden Stage in particular rising up like a Mayan pyramid (plus) a brand new palatial Orchard Bar to give our free-range festival-goers plenty of room to dance…

It was necessary, of course, that a line-up fit for the Gods themselves be given hallowed new ground to perform on. Gentleman’s Dub Club got the proceedings going on Friday night, instantly rejuvenating any travellers weary from their trek to the farm. On Sunday night, Imelda May and her vocal chords of honey gave us a well-needed mind-massage after a jam-packed weekend. Hooked on the vibes, our Saturday night headliners, Jurassic 5 joined in with festival farm frolics, sampling the local cuisine and being schooled in the prestigious art of Having A Good Time.

Just next door, on the Garden Stage jungle legend Goldie picked us up by the (metaphorical) ankles and shook out our brains for loose change on Friday while DJ Marky & MC GQ churned the crowd up like Neptune with a wave machine for a Sunday night final tune like no other.

Nozzers who ventured off the beaten track discovered that the farm is as chock-full of treasures as Tutankhamun’s Tomb – and around the fringes is where things get really freaky. Clik Clik Collective’s Cabinet of Lost Secrets was back, bigger, better and weirder than ever, complete with trap-doors, woodland creatures serving you cocktails and even a sneaky surprise gig by Jurassic 5: a little thank-you from the festival gods to one of the best, friendliest and fun-lovingest bunch of revellers we’ve hosted on the farm yet. Festival-goers suffering jet-lag from travelling back in time to the Ancient World were also invited to have their consciousness reset at the Psychonauts’ Mind Surgery, a new addition to the farm’s 2016 landscape. Just a hop, skip and a gentle roll down the hill from the Surgery, the Laughing Stock played host to a comedy line-up stuffed to the gills with stars, including prime jokemongers Richard Herring and Henning Wehn. Herr Wehn even got his hands dirty with planting a new addition in Celebritree Avenue, joining the likes of Molotov Jukebox, Mr B and The Proclaimers in the creation of a future forest.

Noz-goers this year discovered that having a good time also meant doing a lil’ good for the planet and those who inhabit it, raising over £3000 – more than ever before! – for a load of causes just by treating themselves to a relaxing massage at Yeleni Healing Centre or a cheeky slice of cake at The Chicken Cow Café. It’s safe to say that if you came down to the farm in 2016, there should be some good karma coming your way.

All in all, a farm full of good vibes and smiling faces does a happy festival make. And we’re clearly not the only ones who thought so: 2016’s award harvest produced a bountiful crop of commendations, nominations and prizes. First of all we were named best festival in the ‘Shire by the Visit Herefordshire Awards 2016, as well as being nominated in more categories than any other festival in the UK Festival Awards 2016. Best of all, we bagged an Excellent rating in the Greener Festival Awards and won an Outstanding Attitude Award from Attitude is Everything, who work towards making live music events accessible for everyone.

2016’s Nozstock shall surely become the stuff of legends, passed down from generation to generation to be studied by the archaeologists and historians of the future in an attempt to understand their past. To refresh your memory of fun gone by take a peek at the Nozstock 2016 hyperlapse…