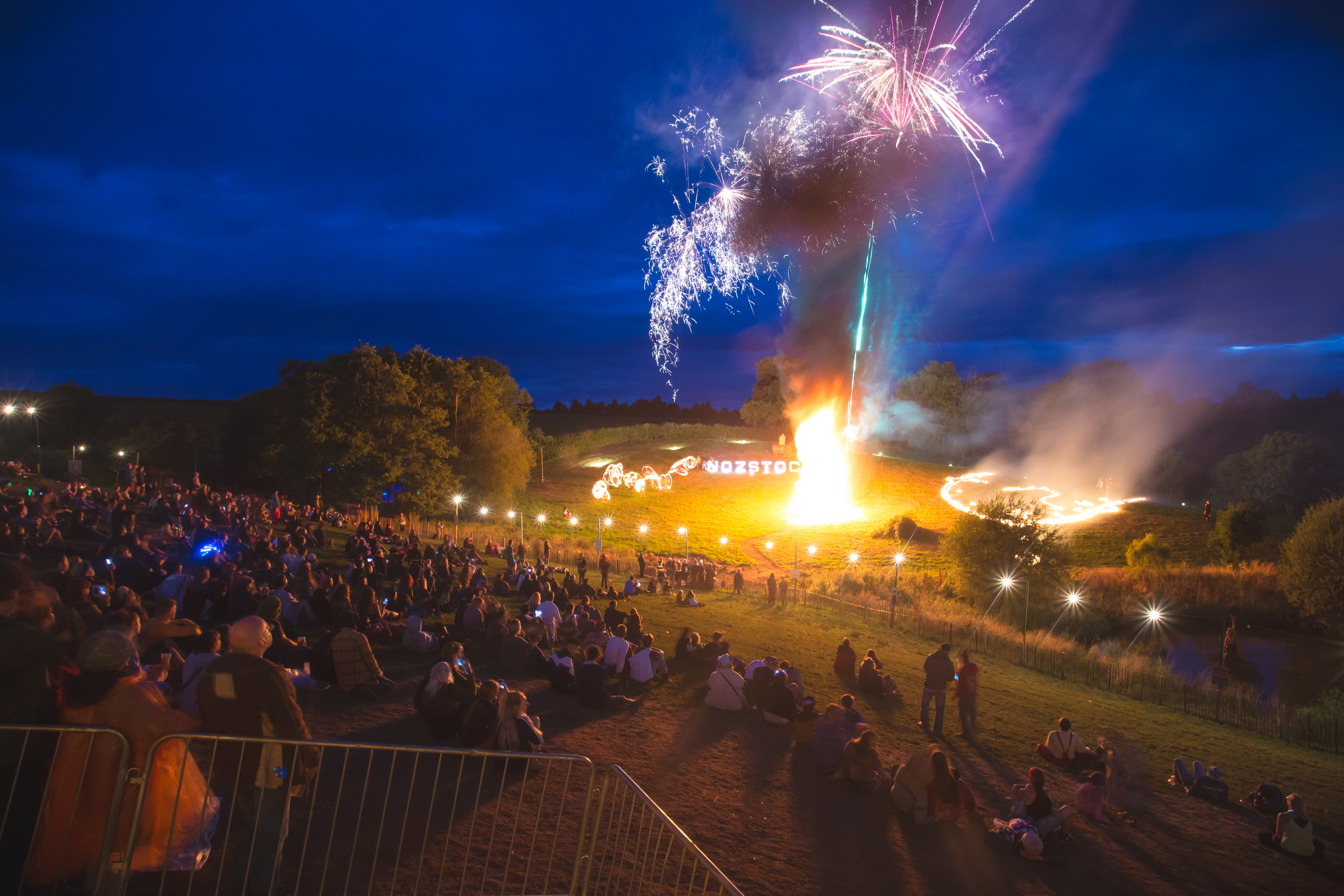 ‘It packs a might punch and does so with a decent dose of humanity. Long may it continue to be like this’

Nozstock veterans should be well aware of the Mythology of Noz: what started off as an intimate BBQ for family and friends in the front garden of a ramshackle farmhouse grew into a festival sort of by accident. Each year has seen the humble farm transformed further and further away from its natural state. In 2013 cowboys and tumbleweeds roamed the Wild Wild West Midlands; 2014 will go down in prehistory as the year dinosaurs walked the Hidden Valley; and in 2015 our dedicated decor crew took us to a galaxy far, far away. But there’s only so many times you can stub your toe on a half-excavated flying saucer when you’re out walking the dog, or find yourself stirring your brew with a pterodactyl feather when there’s no clean teaspoons, before it all gets a bit too much. For the nineteenth edition of Noz we decided – enough is enough. Let’s take Nozstock back to basics, return to its roots. Fortunately for you, Nozstock has some seriously surreally weird roots… and, as ever, you revellers rose to the challenge.

Yes, for Nozstock 2017 we decided to Keep it Surreal. In an homage to one of history’s freakiest cats, Salvador Dali – a proto-Nozzer, if you will, who would no doubt have felt right at home on the farm – melting clocks slipped ‘n’ slided up and down the slopes of the Hidden Valley. The Bandstand was transformed into an all-day breakfast, while the Son of Man kept a watchful eye over proceedings on the Orchard Stage. And it’s a good thing he did: from early-morning breakfast-club acoustic boogying to late-night hip-hop legends, performer and crowd conspired to brew up a musical storm in a teacup that just about threatened to overwhelm us all.

As if the universe was testing your dedication to the cause of fun on the farm, mighty clouds gathered over the Hidden Valley as the gates swung open on Friday, and for a minute there it seemed that the ground was about to open up its muddy maw and swallow us whole, headliners and all. Nevertheless you all, as ever, rose to the occasion, and Friday night saw you welcoming Seasick Steve to get down and dirty on the Orchard stage with a dose of Herefordian spirit (and hastily distributed sawdust) that was more than a match for his hillbilly grit. By sunrise on Saturday morning, the previous night’s mud-fest seemed like naught but an acid dream. Although the idyllic weather may have lulled us into thinking school was out for summer, our Saturday night headliners reminded us that class was very much still in session: delightful rappers The Sugarhill Gang schooled us with a crash course in hip-hop history, with surprise special guests Mele Mel and Scorpio joining Wonder Mike, Master Gee and Hen Dogg for an encore which encompassed sing-alongs to Nirvana, the Human League and Michael Jackson, to name but a few. On Sunday night Madchesta pioneers the Happy Mondays gave you seventy-two hour party-people the send-off from the farm that you deserved: if you can think of a better way to see in Monday morning than Bez’s dementedly joyous tambourining, we don’t wanna hear it.

2017 also saw some serious change afoot in the Hidden Valley. We like to think that Nozzers consider the farm a second home: in that case, arriving at the festival this year and seeing our brand spanking new stage must’ve been like discovering a hidden kitchen in your house that you never knew you had. Further proof – if needed – that Nozstock is surreal down to its very bones, this year saw the grand opening of the Elephant’s Grave, a temple to reggae-by-day and house-and-techno by night built on top of an Ancient Elephant Burial Ground. Legend (and local newspaper clippings) has it that Rowden Paddocks houses the graveyards of a number of exotic animals belonging to a local circus owner in the mid-20th century, and this year revellers partied hard enough to wake those dead elephants from their slumber. Not to be outdone, the rest of the farm ramped up its usual weirdness. On top of being full to brimming with mirrors, mazes and trick-walls that lifted to reveal eight-piece bands, everybody’s favourite burrow The Cabinet of Lost Secrets played host a wedding whilst the festival was in full swing. In true surreal style, the bridesmaids wore all colours of the rainbow while the bride and groom made their way down the aisle accompanied by Madonna – Like a Virgin. Viva Noz Vegas – and the happy couple. Meanwhile on the Orchard Stage, cover bands had you scratching your heads and tapping your toes with a “wait a minute – isn’t that by – ?”. Our old pals Hayseed Dixie were back on top form with a particularly notable bluegrass Bohemian Rhapsody, while Saturday lunchtime saw all our souls cleansed and our sins forgiven by a sermon from Oh My God! It’s The Church, including a rousing Southern Baptist rendition of Hey Ya! Which had you all on your knees – mud and all – and praying for just one… more… song…    When you add to that The Correspondents bringing Mr Bruce’s exceptional shapes back to the farm, Goldie Lookin’ Chain gracing us with a legends set, and LEVELZ on the Garden Stage embracing us all as part of their motley crew, it was very much business as (un)usual in The Hidden Valley in 2017.

It’s serious business, all this fun we’re having. And if there’s one thing we’ve always said on the farm, it’s that we’re here for a good time and for a long time. That’s why, year on year, we make it our mission to make the festival greener and more sustainable so that we can pass on the treasure that is Nozstock for generations to come. In 2017 everyone’s favourite whiskey-soaked balladeer Beans on Toast found time between setting the world to rights on the Orchard Stage to plant the green latest addition to the illustrious Celebritree Avenue, following in the footsteps of Henning Wehn, Molotov Jukebox and The Proclaimers, to name but a few. And although all good things must come to an end, in 2017 we well and truly went out with a bang, with a site-wide procession of acrobats, performers and fire artists – as well as the odd reveller who joined in along the way – leading the way to the infamous Nozstock sign to treat you all to a fireworks display, bonfire and mind-melting pyrotechnics. No – it wasn’t just a mass hallucination induced by three days of surreal farmside fun: the festival closing fire-show only went and won ‘Most Mind-Blowing Spectacle’ at the 2017 An Independent Festival UK Festival Awards.

Yes, 2017 will be a hard act to follow – but we’re pretty sure we’re up to the challenge, with a hearty dose of nozstalgia heading our way for 2018. If you’re missing 2017’s festival, or missed out on it altogether, don’t fret – check out this video of all the best bits.