Another fabulous creative that we have the pleasure of working with a la Nozstock, it’s Oskar McCarthy, the manager of the wonderfully whacky, theatrical Department of Cultural Affairs found within the world of the Altered State. 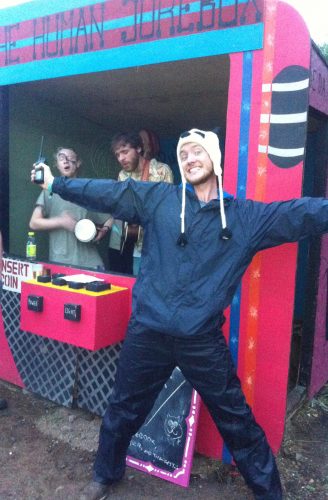 What is your role at Nozstock?

I have been part of the Noz family since 2014, and now programme and manage the Department of Cultural Affairs (our mixed-arts theatre space), the roaming walkabout and circus acts, fire performances and the final night spectacular. I can generally be found on a constant tour of the site checking in with all the lovely artists I have the pleasure of working alongside each year. I get to see so much of the festival – it’s an exhausting but exhilarating role!

What is your favourite Nozstock memory?

It’s hard to pick just one! Nozstock is full of talented and generous people who work incredibly hard to create an epic festival every year. 2017’s final night spectacular, which went on to win Nozstock its first major award, was certainly a high point. Watching the Altered State grow over the past three years, from an idea into Noz’s epicentre for playfulness and interactivity, has also been brilliant.

What are you most looking forward to at Nozstock The Hidden Valley 2021?

Seeing returning acts perform alongside those new artists who have been scheduled to appear for well over a year now! We’ve got a real range of theatre, workshops, talks and demonstrations alongside dance, comedy and spoken word in the DoCA plus a few surprises up our sleeves elsewhere. The Altered State is the place to be for those classic festival moments of spontaneity and silliness!

What are your festival essentials?

Arriving with a sense of play, wonder and openness to experiencing everything across the whole festival programme. More practically, a proper camping setup! I have slept in the same trusty festival home ever since I went to Burning Man in 2013 and can’t imagine returning to the days of flimsy tents purchased at the last minute. A reusable water bottle is a must (as in life generally) and a comfortable pair of shoes are also an absolute necessity, especially at Noz when I’m on my feet all day (and most of the night…)

When you’re not at Nozstock what do you do?

I am a freelance classical singer, actor and Executive Producer for Festival Voices, a contemporary vocal ensemble who make transformative choral experiences in collaboration with different art forms.
Buy Tickets