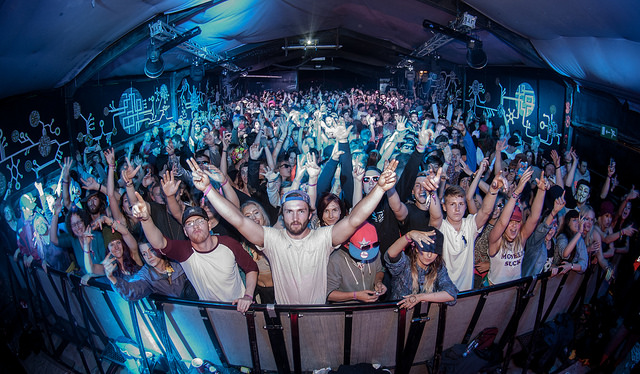 “I’d never heard of Nozstock but I remember speaking to Andy C years ago and he said he was playing, so that triggered something. Festivals like this, those kind of un-sung hero’s… it’s hard for them. I was told, you can f****** play anything here because the crowd, they get it. The first three tunes I thought, let me see how they react, and they really f******* reacted to the deeper side of the music. Sometimes I struggle at festivals because I wanna play underground and play on the edge. I don’t want to compromise the music. It’s always a really good test (of the type of crowd) when you can play a lot deeper.” (Goldie)

Now with 20 years under our belt it is without question that drum ‘n’ bass holds a special place in our heart. Since the very beginning we’ve championed this sound with some of the UK’s drum ‘n’ bass pioneers coming to perform down on the farm.  We assure you that 2018 will be no exception…it’s going to be unmissable.

*Please be upstanding* Kicking things off and one of our three Orchard headliners we have English D&B duo, Chase & Status, performing a DJ set alongside MC Rage. Having formed in 2003, the same time our official D&B area, The Cubicles, was born, it seems fitting to have them take centre stage at this years festival, we’re more excited than ever before. Do not miss this one Nozstockers!

After two epic live stream sets last year from Levelz and Uncle Dugs, DJ Mag Bunker are back and this year in The Cubicles. Catch them collaborating with Metalheadz ready to bring you a bag of bass heavy tricks.  On Friday night they welcome respected and revered producer Dillinja, Remidy MC, Hospital Records most eminent producer S.P.Y as a special guest, the man with 25 years’ experience under his belt, Randall with M.C Trafic plus support from Dispatch Recordings’ Amoss, Metalheadz head honcho Ant TC1, and our special guest and long standing Nozstock veteran, Octo Pi, and homegrown local talent Scope. There is only one place we will be spending our Friday night.

On Saturday, Black Sun Empire represent the finest in dark and tech fuelled alongside another killer line-up featuring Mollie Collins, our very own Nozstocker Modify Perspective, returning legends Uncle Dugs & Billy Daniel Bunter and a special set from one of our favourite producers, Bladerunner ft. Carasel. The Cubicles are looking stronger than ever before just get us in them cowsheds!

Sunday sees a takeover of mammoth proportions on The Garden Stage but we can’t reveal much more then this yet…all we’re saying is if you love D&B we’ll be giving you over 6 hours of it closing 2018’s festival with an almighty bang.

Catch live performances from Goldfrapp, Macka B, The Selecter, Dub Pistols, Electric Swing Circus, Kiko Bun, The Lovely Eggs, Oh My God! It’s The Church & many more… The theme for the 20th anniversary is Nozstalgia – anything from Gameboys and Ghostbusters to the Karate Kid and flared jeans. The festival takes place across an idyllic working farm set in beautiful countryside.