A history of Nozstock #20YearsOfNoz 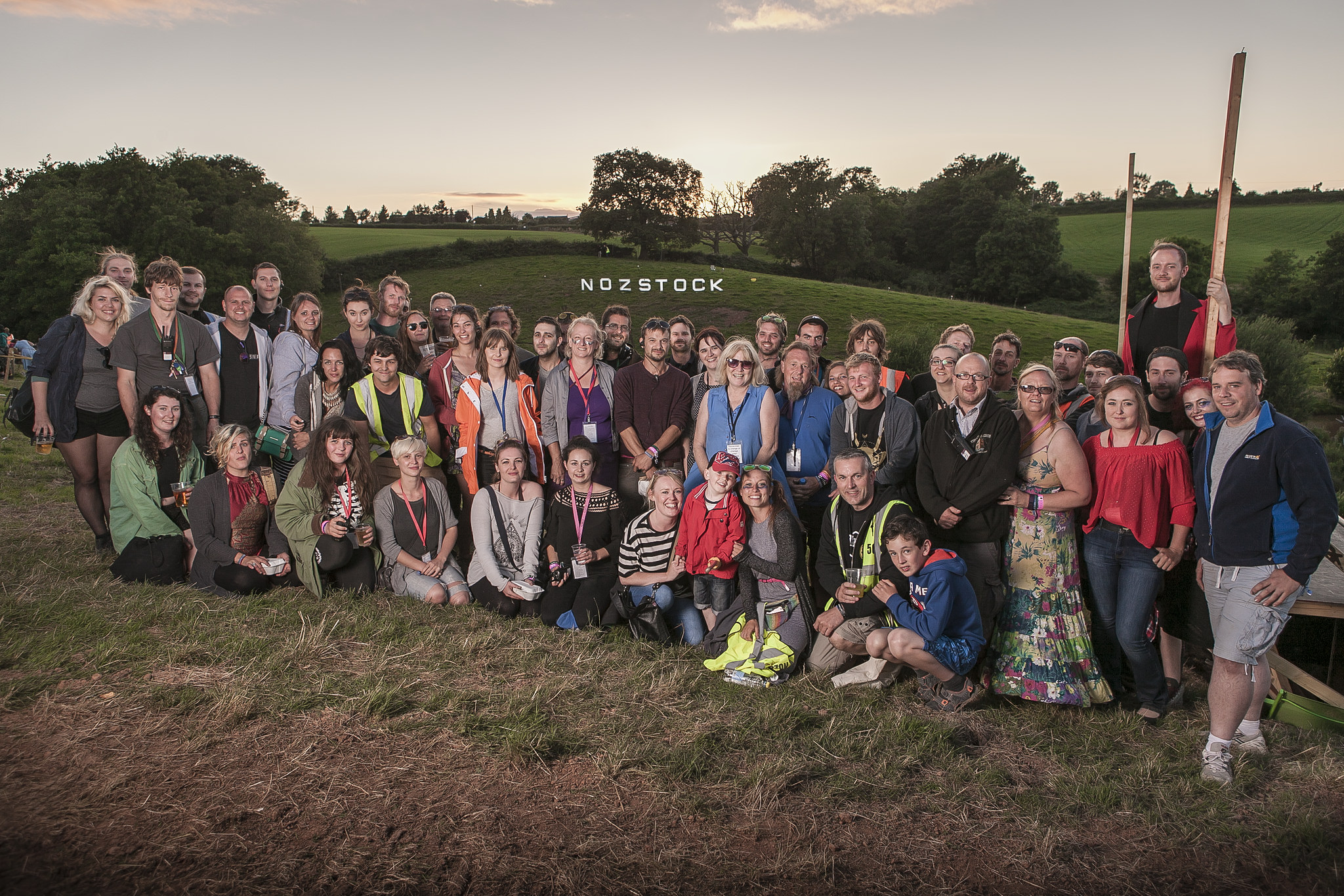 With 116 days to go until we celebrate our 20th anniversary, we look back at the past 20 years of Nozstock. From the very start we have provided a platform for young artists to flourish and showcase their work to the world and we’re proud to have brought acts from all over the globe to our humble Herefordshire. Everyone loves a rags-to-riches, small-town-boy-turned-good, underdog tale, but how exactly did our little BBQ of family and friends supping tinnies on the front lawn turn into a fully-fledged festival with eleven stages and sights and sounds to please every eye-and-earhole?

The Orchard Stage has had innumerable musical giants treading its boards in its time but every year revellers and performers alike big up the Garden Stage as having that certain je ne sais quoi; perhaps, like the early Britons building their stone circles, they can sense that something magical happened here once upon a time. And indeed the Garden Stage is where it all began! Growing right off the tumbledown farmhouse that actually houses our Noz family year-round, like a wonderful wart; it was in 1998 that the first Nozstock took place, and the proto-Garden Stage was where its first acts played, with friends and family enjoying the odd BBQ sausage and the strains of Farmer Nosworthy’s supergroup, Electric Shepherd (Papa Noz on guitar, his son Rob Noz on bass, Darren, main stage manager on vocals, if anyone’s interested). Perhaps everything that came to pass in the intervening years can be blamed on Dad’s unquenchable thirst for rock-stardom: perhaps it was simply meant to be.

Our farmhouse acted as a green room, with the Shepherds climbing through the kitchen window to get on and off stage and avoid the hordes of adoring fans. We were all pretty spurred on by this taste of ‘fame’, Nozstock began in earnest and indeed 1999 was the year the festival got its name (a pun on Nosworthy + Woodstock – geddit?).

In 2000, Richard Bayliss aka DJ Dex joined the party, as Farmer Noz invited him to spin a few records after Electric Shepherd had played their set.  The dancefloor was what is now our crew canteen- such as it was back then – filled instantly, and DJ Dex has played at every Nozstock, Noz-party and Noz-wedding ever since! DJ Dex was pivotal in expanding the festival beyond the Garden Stage and, with it, beyond the boundaries of genre.

2003 saw Nozstock’s first dance arena born, The Cubicles.  Noz regulars had been soaking up the drum ‘n’ bass, dance and hip hop in what is now our crew kitchen and faster than the DJs could dish it out, and so – like a brand new volcanic island being spat out by a tectonic plate – the Cubicles were formed out of our converted cowshed. Our overgrown garden party was still a ‘by invitation only’ kind of event, though the invite had spread from friends to friends of friends to friends of friends of friends (with tickets still including a free burger!). Until… 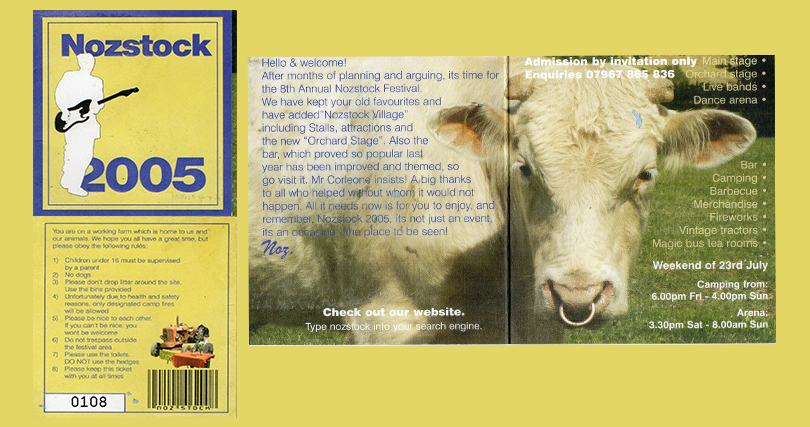 2005 was very much a game changer for the us as a family: Mama Noz stood in the farmhouse kitchen making cucumber sandwiches for everyone who had come to join the fun, she looked out the window and realised that what her family BBQ had morphed into a thousand people sitting in the yard. It was make or break time for us as a festival: do we get license, do we open our gates to the masses, or get out the industrial sized broom and shoo the revellers off our front yard, threatening to burst our football next time they kicked it over their fence? We chose the latter. 2005 was also the year the Orchard Stage opened for business, though any seasoned Nozstocker may be surprised to learn it began as a humble little acoustic stage rather than the scene-stealer it is now.

The friends who had previously come over to eat burgers and have a muddy jig found themselves becoming stage managers, decor queens and marketing wizards practically overnight. DJ Dex, roped in as a booker, found that initially asking agents to let their artists play in a converted cowshed in the middle of the countryside was a bit of a tough sell. Once the acts had seen the farm for themselves – and felt the energy radiating from the Nozstock crowds – they would play on late into the night, running over their allotted times and practically begging to come back the next year.

It’s a testament to Nozstock’s chameleon-like nature that just about every Nozstock veteran has a different answer to the question “who’s the best artist you’ve ever booked?”. For some, it was DJ Friction’s first year; for others, Andy C stands out as the sign that Nozstock had really ‘made it’ as a festival (turns out he’s just as addicted to the Cowsheds as you all are, as he’s since become a firm friend of the festival and Nozstock regular); and who wouldn’t feel an almost godlike power at being able to book your favourite childhood artists like Jurassic 5, Roots Manuva or The Buzzcocks to play in your own flippin’ front garden? Lucky 2015 attendees may even have caught a glimpse of Mama Noz in the wild when – temporarily freed from her duties as chief of all things ticket and finance related – she got onstage with life-long favourite Martha Reeves and her Vandellas to showcase Herefordshire’s finest dance moves.

With the main stages sorted, we realised the time was ripe to scratch some of our more eccentric itches and give the people what they didn’t even know they wanted; namely, an amalgam of craft, theatre, burlesque and general absurdity to rival any primary school art teacher’s supply closet. And thus Wok’s bridge was erected across Bluebell End towards the Dingle, which opened in 2007 and is now home to the Wrong Directions Cinema Tent, Little Wonderland kids’ area and – apple of Phil Jupitus’s eye – The Bandstand, to name but a few.

By 2008 the farm was starting to fill up – not only with revellers, but with artists, stages and structures and we started to know what we were doing, well at least we felt like this. With the cowsheds and milking parlour already full to the brim with dance and drum ‘n’ bass, Tribe of Frog made their home in the group of trees at the bottom of the hill leading down to what is now known as the Coppice: among the shrubbery and UV butterflies, they have been delivering psytrance and good vibes to the Nozstock masses ever since.

The years have passed like grains of sand through an hourglass (occasionally torrentially muddy sand, through a rainy hourglass, admittedly). Although Nozstock has been well established for the last ten years, the festival and the site itself have never stopped evolving, like some many-headed hydra which can only be appeased with a serious dose of revelry.

In 2011 Sika Studios were welcomed onto the farm to take over the Bullpen and make the area their own, including a very memorable takeover from High Focus records in their inaugural year. In 2015 the Cabinet of Lost Secrets burrowed their way into the farm and into our hearts when their secret underground lair opened for business, leaving festival goers bewildered, bamboozled and desperate for more… The discovery that Rowden Paddocks had once played host to a real live circus and is the final resting place of its pachyderm performers prompted the most recent addition to the farm, the Elephant’s Grave, home to reggae by day and handpicked house and techno by night.

The non-believers among you may say that’s that: surely there’s no room for more stages, hidden areas or unexpected experiences on our overflowing farm. And to those doubters we say: we will party on the beaches, on the hills and in the fields, we will party in the streets. When there is no room left on the paddocks, we’ll build stages in the trees; we’ll be the first to play dubstep at the core of the earth; we won’t rest until the Nozstock flag flies proud upon the moon… you ain’t seen nothing yet. 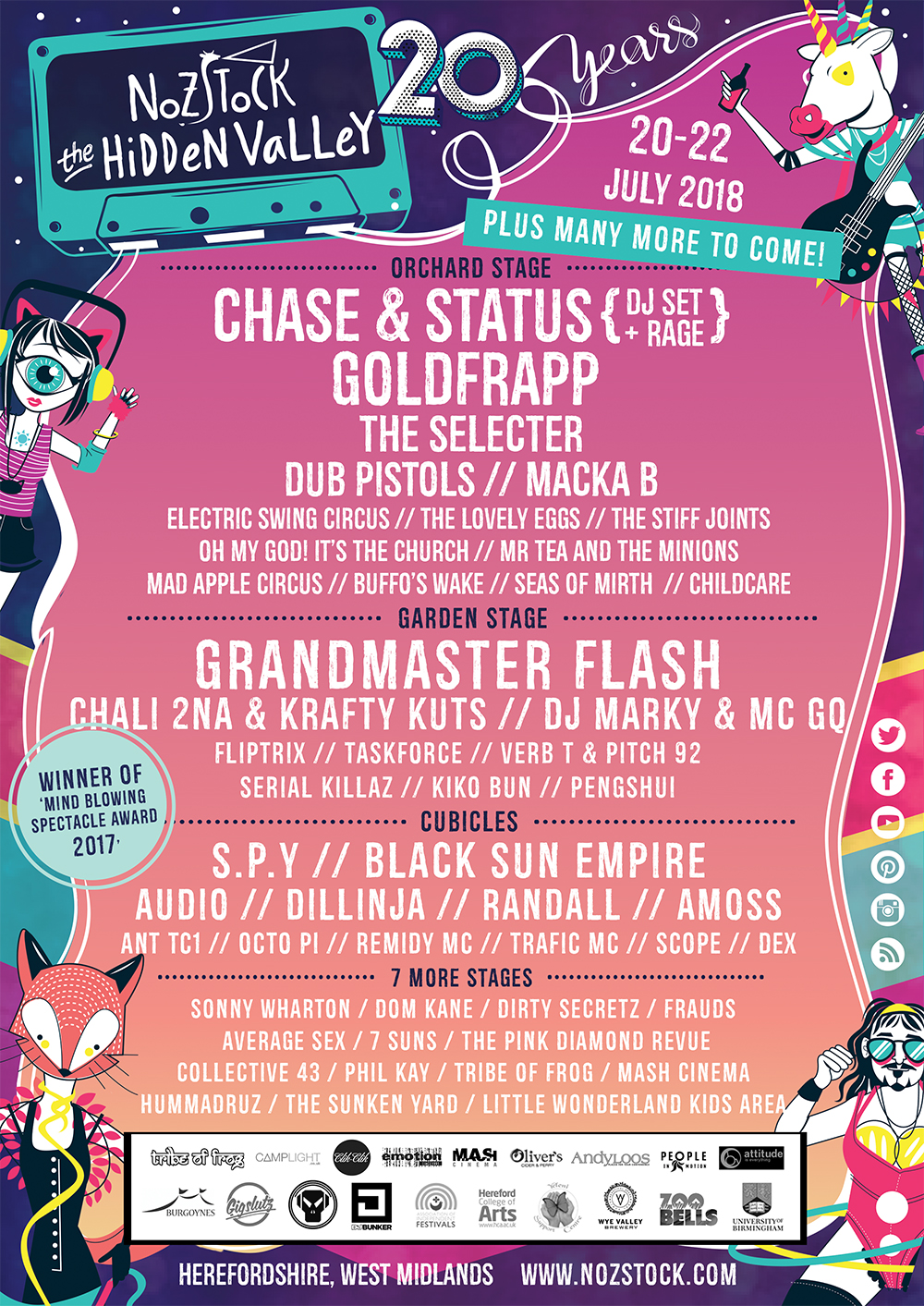