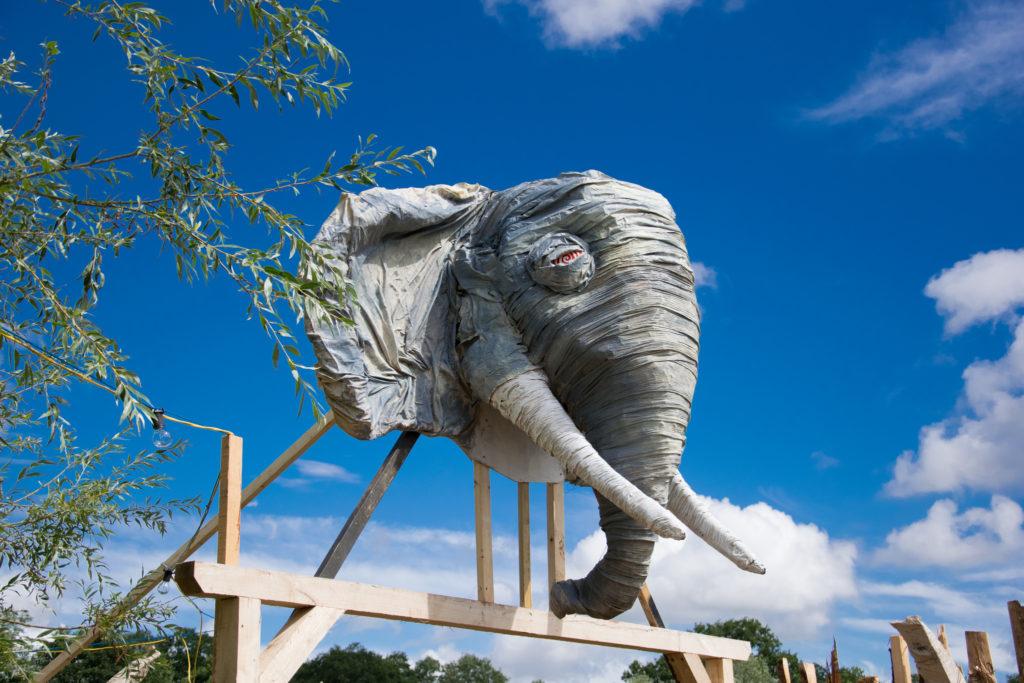 Launched in 2017, the Elephant’s Grave hosts Reggae by day and by night, House Raids. A firm favourite since it’s induction to the magical land of Noz, The Elephant’s Grave 2019 is bouncing back with a vengeance, and with a few familiar faces you’ll be happy to hear are returning to tear it up again.

Badboy events promotion & production collective. Bringing the party to the South West from 2014 til infinity, Gorilla Tactics curate regular nights in Bristol & Bath as well as running festival stages all over the UK – including Wrong Side Of The Tracks at Boomtown. Their motto: to bring fun to anywhere, one or thing!

Bass collective Subwork return to the Elephants Grave, ran by our very own Garden stage co-ordinator Tenz. A Brap FM regular, Tenz know’s a thing or to about curating a great lineup. With the Subwork set-list still to be confirmed, you can bet there’s something special in store.

Data Transmission feel just as passionate about good dance music as Nozstockers do, so it made perfect sense to invite them back to take the reigns again for Friday night at Elephant’s Grave. The online dance music authority, DT’s wide scope means they have one of the busiest news sections around, with interviews and features from the worlds most exciting DJ talent.

After unforgettable takeovers at Noz 17 and 18, head honcho Sonny Wharton and crew return to Elephants Grave to celebrate 10 Years of the amazing Whartone Records. Founded in 2009, it’s been an incredible decade for them. Whartone Records has drawn support from the likes of Carl Cox, Pete Tong and Roger Sanchez, received plays on Radio 1, Kiss FM and Capital and celebrated numerous top 10’s across the download stores. With a huge line up including Sonny Wharton, Dom Kane, Dirty Secretz, Luke Stanger, Left Stereo Right ~ live, Kid Cut, House Meanz House and more tba, we can’t wait to see what their tenth birthday party will bring…

A firm fixture in the House and Techno scene, Sonny Wharton has established himself as one of the finest DJ/Producers to emerge from the UK in recent years. Sonny’s skillful ability to captivate the audience with his energetic performance and diverse track selection is what prominently positions him behind the decks of many of the world’s biggest clubs and festivals. Whilst sharing the bill with everyone from Laurent Garnier and Steve Lawler, to Armand Van Helden and Eric Prydz, Sonny consistently delivers on a global scale playing everywhere from Pacha, Sao Paolo and the Berlin Love Parade in Germany to London’s legendary Ministry of Sound and the iconic Glastonbury Festival. Holding international residencies at both Club Octagon in Seoul and Solidaritet in Stockholm, Sonny’s DJ career has been solid from the start.

As an artist, 2016 saw Dom Kane signed to mau5trap, with his music having previously been heard globally in DJ sets from the likes of Deadmau5 and James Zabiela to name a few, with plays on BBC Radio 1 and Capital FM. As a DJ, Dom has held residencies at some of the world’s most legendary clubs. As a sound designer, the name Dom Kane has appeared in factory presets for synthesisers including FXpansion (D-CAM & Geist), Xfer (Nerve/Serum) and the legendary hardware synth company Moog (Animoog, Little Phatty, Slim Phatty, Sub 37 Tribute). Since Dom Kane was featured with an Artist Series sample pack on Loopmasters back in 2008, his sound banks and samples have appeared in studios worldwide via his own label Quantum Loops too. The past few years alone saw Dom Kane ascending fast amongst the ranks of House music producers: his singles and remixes topping the online Top 40 (Signal Rejected, Space, Blagger); as well as having a full artist feature and front cover DVD in Future Music Magazine. His music has appeared on TV channels including; Sky1 (Got To Dance), Channel 4 (Embarrassing Bodies), E4 (Made In Chelsea) and Channel 5 (Celebrity Big Brother) to name a few.

Dirty Secretz is one of house music’s most exciting artists. With tracks unleashed on respected house music labels including Skint, Stealth and Nervous alongside a wealth of track support from Armand Van Helden, Todd Terry and Fatboy Slim to name a few, it’s easy to see why this Leicester-based DJ is causing a fuss on both sides of the Atlantic. Dirty Secretz music frequently hits the radio airwaves with support across BBC Radio 1, Kiss FM & Capital. From remixing legendary artists X-Press 2 & K-Klass to focusing on his solo releases and DJing for Rolling Stone, Dirty Secretz refuses to stand still.

Nothing quite expresses those summer festival vibes better than upbeat, groovy house music, and nobody does upbeat, groovy house music like Luke Stanger. With that catchy vocal, a cheeky nod to the rave days and another funk enfused bassline Luke’s next single ‘Acid House’, forthcoming on Whartone Records, will transport you from the rolling Hills of Herefordshire to the glistening beaches of Miami.