Compete to be wordsmith of the year in NozSlam! 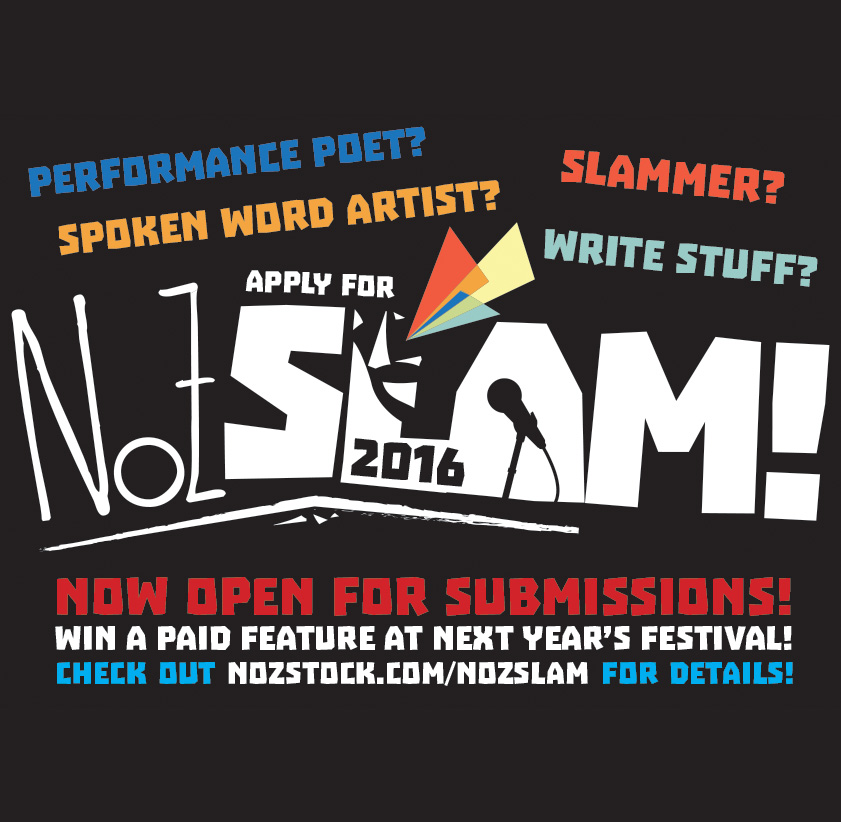 Nozstock’s very own poetic pugilism platform is entering its third year of existence and we want YOU to join the host of awesome amateurs, poetic professionals and (even!) national champions that have graced our ears, eyes and stage over the past two years by submitting for “NOZSLAM 2016!”

In case you’ve somehow missed out the last two times round, let us break it down for you: slam is performance poetry, but with a playful competitive edge.  Poems can be funny, sad, angry, happy, political, topical, rhythmic, lyrical, dressed up in sparkly spandex leggings doing stag leaps across a pond of peanut butter… whatever it is that tickles your cerebrum, just so long as it is tickled in less than three and a half minutes! Each performance gets scored out of 10 by our five judges, the highest and lowest scores are dropped, the results are tabulated, totted up and the top scorer takes home the trophy!

If you’d like to throw your metaphorical hat in the ring, then all you need to do is make a little video of you performing your poem, and send it to [email protected] along with your name and a description of up to 50 words to be featured alongside it by 30TH MAY!

We’ll upload all the submitted poems to the NozStock YouTube channel on 3RD JUNE where they’ll remain for the public’s viewing and VOTING pleasure until 17TH JUNE. The ten videos that receive the most YouTube ‘likes’ will be short-listed, and then it’s up to the whole NozStock team to discuss, disagree, debate, and eventually somehow decide on the five slammers (ANNOUNCED 27TH JUNE) who’ll receive FREE tickets to come and compete in the live Sunday final at this year’s NozStock Festival!

The winner of our main event slam will receive a whole host of NozStock goodies, heaps of adoration and, most importantly, a coveted spot in the Tent Of Temporary Thought line-up next year!

So whether you’ve always felt there was a poem burning in you that you’ve just gotta get out, or you’ve been doing this spoken word lark forever, it’s time to sharpen your pencil, limber up your larynx and show the world why you deserve to be NozSlam Champion 2016!

P.S. If you’re stuck for inspiration or just want to see more of this slamming stupendousness – then head on over to www.youtube.com/NozstockFestival and check out entries from the last couple of years!