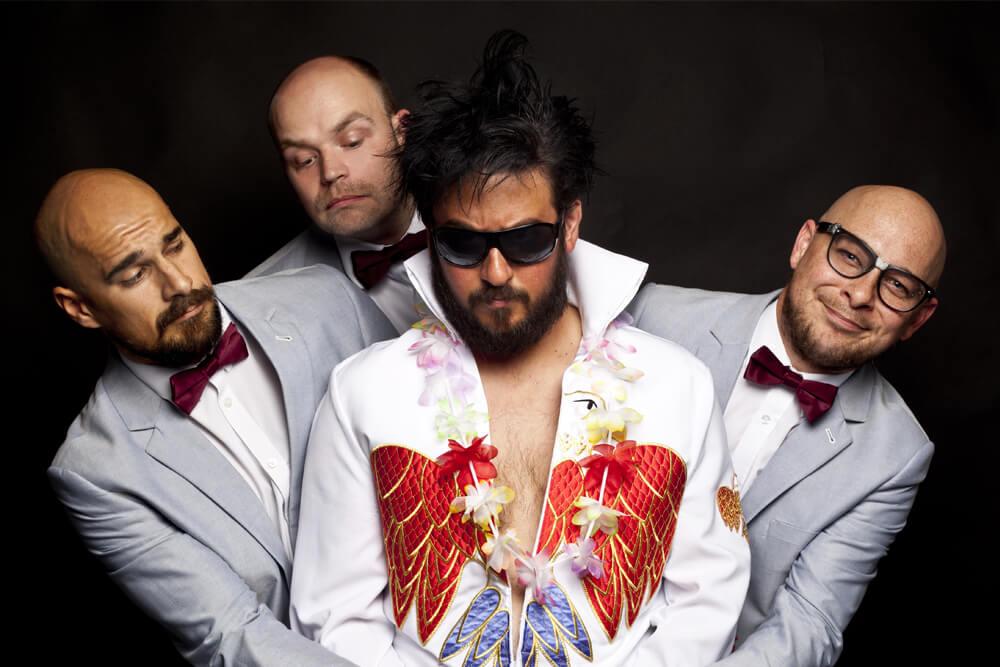 We caught up with the bootleg King of Rock and Roll and his grungy crew to discuss fusing unlikely mash-ups, performing on our beloved Orchard Stage, and how they met during a fast-food knife-fight over an unclaimed cheeseburger. Needless to say, an Elvana performance is always a blasting ball of rock and fun and a must-see for fun seekers on the farm this year. Full interview follows:

Welcome to your first year at Nozstock! Your performance is a fusion of Nirvana and Elvis’ best work… how did that come about?

Well sir, we all met after we all got into a knife fight over an unclaimed cheeseburger at a popular fast food outlet.  Once the crowd dispersed, we made our peace and discovered our mutual love and passion of all things Nirvana and Elvis Aaron Presley.  To our surprise no one had yet to combine the two so, we proceeded to explore this crazy idea and things kinda went from there.  I never did find out who got the burger in the end.  True story.

For those who are new to your live performances, what can we expect from your Nozstock set?

A celebration of the works of Nirvana and Elvis Presley.  Plus vast amounts of hip shakin’, burger chompin’, head bobbing, sweat pourin’ energy and passion.

An un-named band member got stuck in the toilet one time and had to use his socks and then his pants as makeshift toilet paper.  It was a hot day and took a great deal of counselling to help him recover.  He still walks with a certain jaunt to this day.

What’s your favourite mash-up to perform and why?

Well sir, I am particularly fond of School/In the Ghetto and Rape Me/Love Me Tender.  The transitions on both are sweet as hell and the lyrical juxtapositions are beautiful.

What one piece of advise would you give to first-time festival-goers?

Take QUILTED toilet paper everywhere with you.  Bass Guy is still to recover from his ordeal.

When you’re not in a white jumpsuit and swivelling your hips, what do you like to do in your spare time?

Elvis advises his jump suits take a lot of precision ironing, so … you know, that accounts for a lot of time that is spare.

What’s been the highlight of your musical career so far?

Well sir, we have been fortunate to have many highlights so far – playing to a sold out Nottingham Rock City, our recent US tour, Shepherds Bush Empire, but if I had to pick only one particular highlight I think it would be the time we met a sound man who was in no way sarcastic.  Crazy times.

What do you think the King of Rock and Roll would have to say if he were alive to watch your performance?

Thank you very much.

What big projects have you got lined up for 2019?

It’s another big year for us that’s for sure.  We’ve already been over in Ireland and USA as well as doing two huge shows at Manchester Albert Hall and Shepherds Bush Empire this year.  We gotta whole load of festival shows coming up over the summer including Glastonbury and Download as well as the wonderful Nozstock to name a few.  We’re heading over to Scandinavia and Germany for the first time in September then we have a UK tour in the Autumn.  We’re as exited as a rabbit on the first day of mating season!