Enter the Cabinet of Lost Secrets… 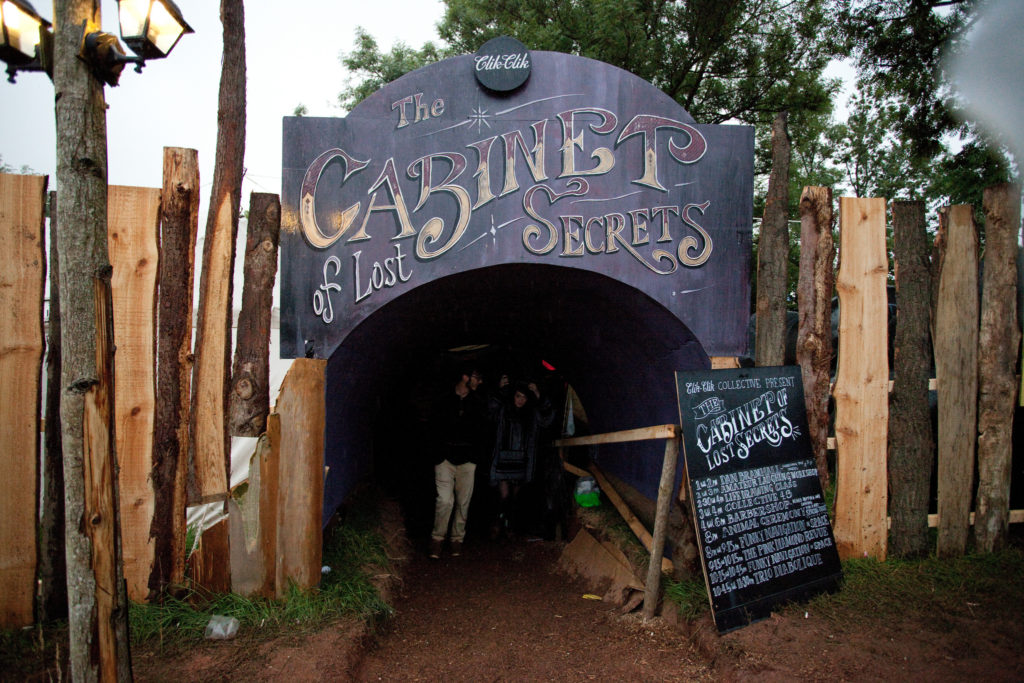 The Cabinet of Lost Secrets is a multi-roomed immersive live music venue at Nozstock the Hidden Valley. It specialises in funk grooves, worldly beats, experimental sounds, interactive performance elements and surprises coupled with a unique design that changes every year; you will never see the same venue twice.

It is run by a team of people who want to create an unusual experience for anyone who steps inside. Led by Kate Cox (director, producer, programmer and venue manager), Phil Wilkins (co-director, design and build manager) and Graham Colledge (assistant build and design manager), the Cabinet is supported by a handful of other clever bods who work tirelessly to get the venue constructed, décor up and help to keep things running smoothly during the festival itself. All of the volunteers who help are absolutely integral to the Cabinet working. The Cabinet is part-produced by Clik Clik, (Kate’s main business) in collaboration with Nozstock. Vision, planning, design and programming starts in the autumn, then the site build starts in the spring.

Kate told us about how the Cabinet of Lost Secrets began: “I’d been performing at Nozstock for years doing walkabouts and pop-ups as my business guise ‘Clik Clik Collective’. I was keen to develop ideas for a small immersive secret venue tucked in the woods somewhere, but then Nozstock offered this huge piece of land! After chatting with my partner, musician Phil Wilkins (who can make anything with anything) we got our heads together and the Cabinet of Lost Secrets was born. The primary objective was to create a space where strange things would happen, people would get freaked out a little, and secret gigs might pop up. It was always intended that the music style would be more on the funk/world tip to offer something different to the other stages”.

We’re very excited to have installment no.4 of the Cabinet of Lost Secrets returning to Nozstock this year, with a new layout to confuse your minds plus a fine array of funk, world, soul, afro and latin grooves coupled with electronica, immersive experiences and DJ’s. And of course the animals are always watching you…..

Getting things off to a fine start we have a little middle American stomping courtesy of The WooTown Hillbillies, then watch out as the Demon Barbers of the Cabinet will be lurking for beard trims and haircuts, while the DJ area in the garden kicks off (2018 features our residents Funky Navigation, plus Beatwell & Dante, and Larsey and Tenz – all rocking a funky groove each day until late). The evening entertainment starts with deep reggae and dub from The King Solomon Soundsystem, before we catch some beat heavy, experimental electronica from sound artists, Swansea Laptop Orchestra. Worldly sounds come next with 7Suns and their sublime Latin and afro rhythms, followed by soulfully hip-hop sounds from Brighton as we welcome back Normanton Street to the Cabinet stage. As it gets late, only the animals know what things might happen in the depths, however we discovered two things: a fresh new London 3-piece called Copper Feel with a funk vibe, then a dose of bizarre sing-songing, don’t miss Neil Pulling on his Organ!

A Life Drawing Class and the customary sing-along with Play It Again Dan open the Cabinet doors, followed by some New Orleans street sounds from The Collective 43. The Barbers and the DJ’s are out and about before the main room kicks off late afternoon with a Balkan heavy two piece (and section of Mr Tea and The Minions) – Razzomo. Cinematic soundscapes and world grooves next from Worcester based Capas, then look out for hi-energy punk funk from Manchester’s Ask My Bull. Bringing things back to a soulful vibe we have Almatic with lush hip-hop and nu-soul, followed by electronic, glorious rock and roll swathed beats and visual treats from The Pink Diamond Revue (back by popular demand). Then those epic Seas of Mirth musical pirates will get you ready for dancing in shanty heaven. Later on, come and find more DJ’s, dark David Lynch inspired Deathly Pale Party and other things to wet your whistle.

We open again with Life Drawing for a calm and creative start to the day and Play it Again Dan to get those tonsils tinkling in our weekend sing-song. The live music starts with a chilled reggae vibe from Worcester’s The Collective, then it is your last chance for that beard trim or hair cut as the Demon Barbers come out of the depths to service you one last time.
We pick up the late afternoon music with some ‘Nozstalgia’ courtesy of The Imaginary Hat – 1920’s jazz meets rock-punk. Funk is fully on the agenda next with the super-tight Mango Factory, followed up by 70’s Hammond-funk inspired grooves from Mohawkestra. The finale live act in the Cabinet on Sunday night is given to the massively current, soft nu-jazz styles of The Feelgood Experiment to bring things to a super-slick end before the funk jam kicks up a storm in the garden to close our slice of the playful pie for another year.

Of course, always expect the unexpected inside the belly of the Cabinet of Lost Secrets as things may appear and characters may prowl. Look out for the secrets, the weird, the hidden things and surprises tucked inside and come, explore, dance and relax in our homemade multi-roomed lair.