Interview with Ant TC1: from his first DJ show at 14, to managing Metalheadz

Manager of Metalheadz, co-founder of Dispatch Recordings and well known for his high energy DJ sets and dark productions, Ant TC1 is no stranger to the Drum ‘n’ Bass scene. This year Nozstock will be playing host to one of the most innovative and respected labels in the dance music scene, none of other of course than Metalheadz. Fresh back from living in Thailand, we caught up with Ant TC1 who will be representing for the Headz alongside Dillinja, S.P.Y, Randall, Amoss, Octo Pi  and Scope on Friday night at #Nozstock2018 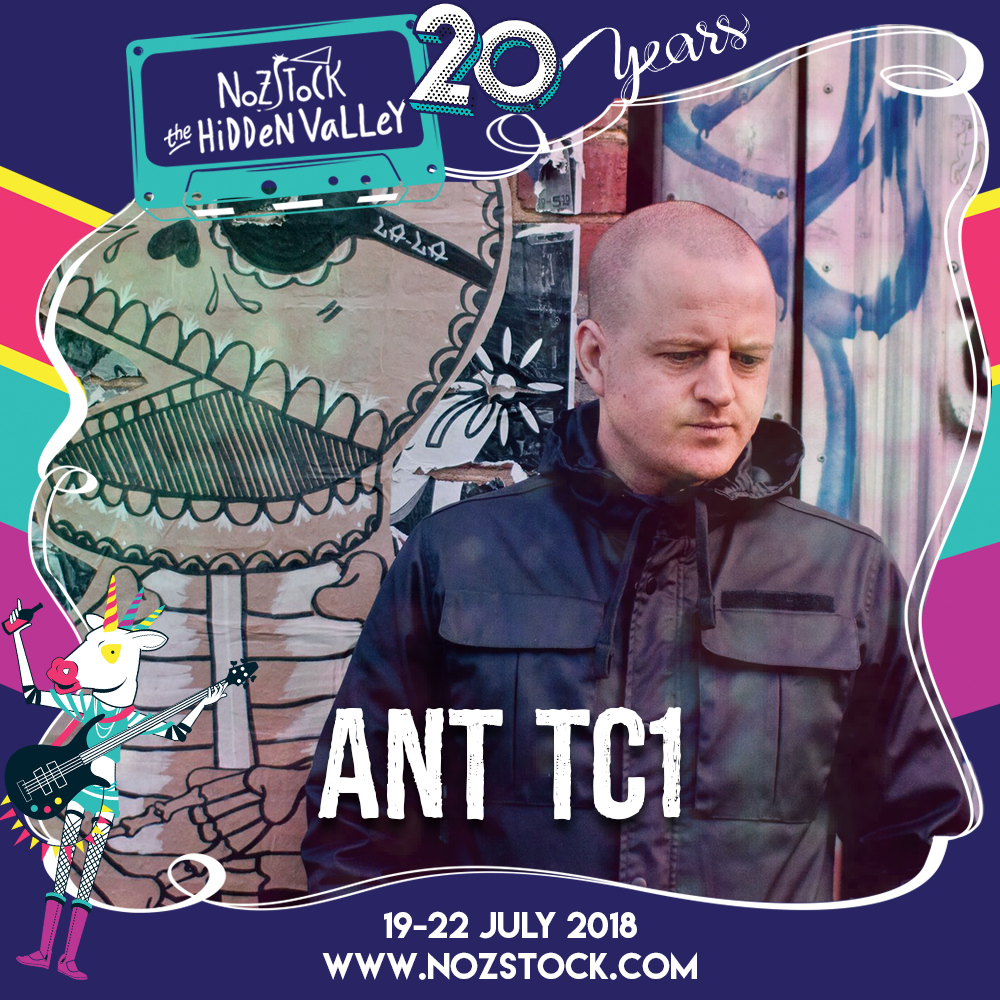 So, what have you been up to recently?

I’ve pretty much only just moved back to the country, just getting used to being back here most of all and climatising. I’ve got 2 shows this weekend coming up and need to get some practice in and shake the rust off beforehand, can feel the nerves creeping in!

So, let’s start from the beginning. I’ve heard you’ve been DJing on pirate radios and in clubs since a very young age?

Yeah I turned 40 in Feb and I started falling in love with rave, jungle and as it’s now more commonly termed Drum & Bass at the age of 13 so back in 1991. Hearing Grooverider mix records together from a Fantazia live event mixtape in 1992 was what cemented my passion for only thinking about music 24-7 and wanting to learn to DJ and anything else I’m now doing today in relation to the music I still love a lot. I handed a demo in to a pirate radio station owner via a friend to get my first ever DJ show on pirate radio aged 14. I passed it over via a friend as I didn’t want the radio station owner / manager to know my age, I remember him laughing when I first showed up with a bag of vinyl ready for my first ever slot on the station but he let go at it, he was just shocked at my age really.

Since then you’ve made quite the name for yourself in the scene over the years and that all started off with yourself and Hidden Agenda launching Dispatch Recordings, right? Tell us a bit about that.

Yeah it was mostly Jason from Hidden Agenda, he’d moved to Leeds and I already had a residency at D.O.P.E (a weekly D&B night in the city that ran from I think 1994 onward), we met there, struck up a friendship and realised we were both into real similar music (swerving towards the deeper stuff at the time). I was already a massive fan of him and his brother Mark (who is now sadly no longer with us) as the Hidden Agenda duo, I just tried to not let on too much and be all fanboy about it. He asked for my help in setting up his own imprint and the label just grew into it’s own thing really over time, eventually Jason decided on a relocation back up north and wanted to take day job stuff / career more seriously as he’d recently had his first child, so rather than close the label I decided to carry it on with Jason’s full blessing.

What then got you into producing?

I’m not gonna lie, I had what I felt were strong ideas towards making music but was always petrified of approaching making music, it all looked so daunting and too complicated, I lacked confidence, just like I did in my DJ’ing for the first 2 years even though I can now look back and see technically I was OK at least (at a young age really I guess) for way longer than I felt I was personally. Eventually I met an old friend Graham (AKA Stress Level) who was starting out on musical production at the time, he had way more technical know how than me and taught me the basics, I always felt our first collabs were way more me simply adding to his own productions and I felt some unease at even having my name next to his on a finished track but through experience and his teaching I got a lot more involved. Next thing, after dedicated weekends working on our sound we sent out demos and got stuff signed pretty quickly, next thing we were having music played on radio 1 and both DJ’ing all over Europe and the rest of the world (which was something neither of us had really had the opportunity of doing much of previously other than the odd local shows at the odd night).

How did all of this then lead onto you managing Metalheadz?

Long story short, I started working on Headz events for Goldie. One day he called me and asked me to run the label, he liked what I’d done with Dispatch and said he liked working with me all round. He told me that he felt I genuinely loved the music, understood it and put it first above anything else so I was the person he felt comfortable offering the role to. I accepted, crazy feeling at the time and now, I had 2nd copies of the first Headz singles on my wall as a teenager, never would have imagined one day managing the label.

So you’re booked for The Cubicles at Nozstock this year alongside Dillinja, Randall, S.P.Y, Amoss & more…how do you think that’s going to go down?

You’ve got some real varied artists on, it’s a great line up, everyone is gonna offer something different and all of those artists are strong faves of mine, I think people are gonna have a blast start to finish, I hope so anyway!

What three things can’t you live without at a festival?

Jaffa Cakes, a spare back up tent and of course, the music.

What can we expect from Metalheadz in the rest of 2018?

We’ve got heaps of events worldwide, the label is showing no signs of slowing down, singles and EPs most weeks and albums from Blocks & Escher, OneMind, Goldie, Agzilla, we’ve got Lenzman, Jubei and Commix well into progress on their 2nd / follow up albums also.

Tell us about one of your favourite festival sets?

I’ve been lucky to play many over the years now, Outlook festival is always a good one, good memories of playing in the ‘Moat Arena’ to an almost ‘bumper sized long corridor’ arena full of people down the side wall of an abandoned fort. There’s something really unique about looking out at the crowd from the performance area.

Thanks to Ant Tc1 for taking time out of what sounds like a very busy schedule! We look forward to seeing him in July.