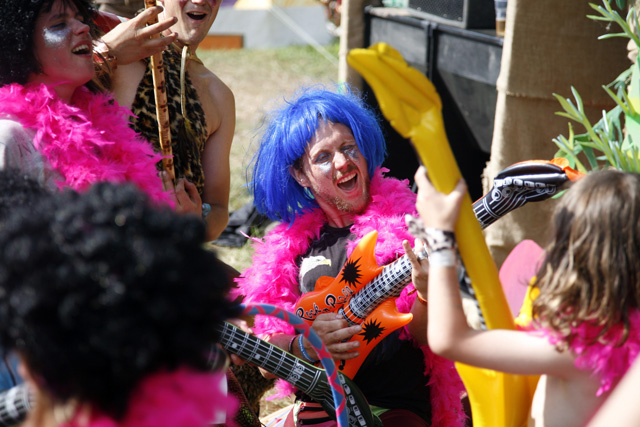 One of our newer Nozstock traditions – this’ll be the third year in a row – is our good ol’ fashioned Sunday Flash Mob. In 2013 you Dolly Parton’d with the best of ‘em, in 2014 you Got It On as Marc Bolan, and who better to emulate in 2015’s space odyssey than the Man who Fell to Earth himself … monsieur David Bowie, the original rock ‘n’ roll alien.

We had to call someone, so we picked you, our loyal Nozzers – we’ll need you to turn up to Bluebell End (the wooden decking down by The Dingle by any other name) at 15:30 on the Sunday of the festival to get made up in your Ziggy Stardust finest before we troop over to the Bandstand at 16:00 with the rest of the Spiders from Mars for a cosmos-shaking performance of ‘Starman’.

If you’re feeling a little shy, why not come along to support your starmates – it might just blow your minds!

Bring along anything sparkly, spangly or downright spacey you might have on hand to perfect that gender-bending hot-tramp chic.

What’s that sound drifting across the farm? That ain’t no DJ (for once…) it’s the hazy cosmic jive of the Nozstock crew warming up for what promises to be an out-of-this-world flash mob …