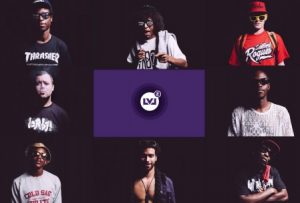 Described as ‘Wu tang- meets the Happy Mondays’ by FACT magazine, Levelz is an exciting group of 14 MCs, DJs and producers creating music in a diverse range of genres. From hip-hop to grime and dubstep, drum & bass to house and jazz, there’s a little bit of everything in the mix. Perfect for Noz!

Hailing from sunny Manchester, Levelz were formed way back in 2013 after local promoter and DJ, Rich Reason, pulled together artists and friends to form a new dynamic group of creatives. The diverse crew is made up of producers and musicians Biome, Bricks, Chimpo, Dub Phizix and Metrodome, with lyrics handled by Black Josh, Chunky, Fox, Skittles, Sparkz, T-Man and Truthos Mufasa; Jonny and Rich complete the crew as DJs. WOW!

What makes their sound so unique is the mix of individuals and personalities within the group, each bringing their unique skills and connections to the mix.

Described as a perfectly focused expression of British bass culture and Manc attitude, Levelz have gone from strength-to-strength since forming and have achieved a huge amount of success already, having completed a heavy duty 15 date UK tour and have showcased their talents on platforms as varied as Channel 4, Rinse FM, Radio 6 Music, 1Xtra and Apple Music. On top of this they dropped their debut 13-track mixtape LVL11 in 2016 and won their hometowns edition of Red Bull Culture Clash, really stepping up a gear.

Since the crews conception, Levelz have become known as one of the most inherently versatile groups in Manchester due to the diverse genre and age range, with the oldest member into his forties and youngest still in their teens.

We cannot wait for Levelz to bring their notoriously infectious and energetic party to the Garden Stage. Get ready to join the party.