We know you’re all still feeling a bit too full from the Easter Chocolate, so we thought perhaps a few more line up announcements for Nozstock: The Hidden Valley might cheer you up!

We’ve got THE JIM JONES REVUE, ADRIAN EDMONSON AND THE BAD SHEPHERDS, C.W STONEKING, THE WURZELS and FOREIGN BEGGARS to add to the amazing dance line up already confirmed.

Jim Jones Revue are one of the hottest bands on the up. They have been described by Mojo as “deranged rock +roll” reminiscent of the Stooges. Their album, Burn Down Your House, has been getting recent media attention but it’s live where this band excels. They’re joined by Adrian Edmondson + The Bad Shepherds who’ve garnered excellent reviews for their folk-style reworking of classic songs such as Down in the Tube Station at Midnight. With a skillful array of multi-instrumentalists they’ll be a “must-see” at Nozstock.

C.W. Stoneking is an American-Australian who defies time and place with his Deep South Blues, having already claimed an appearance on ‘Later Live With Jools.’ Foreign Beggars, recently nominated for Best European Hip Hop Act at the 2010 Urban Music Awards will be playing their bassline grooves. And, The Wurzels are a perfect accompaniment to cider and hog roast as the sun sets over The Hidden Valley on Sunday evening, completing one of Nozstock’s most diverse and exciting line-ups yet with many more acts still to unveil.

There’ll be even more exciting confirmations soon when the comedy line up is revealed. Here’s a tasty teaser for you- The Stephen Frost Impro All-Stars will be returning to grace The Hidden Valley with their top notch witty banter. 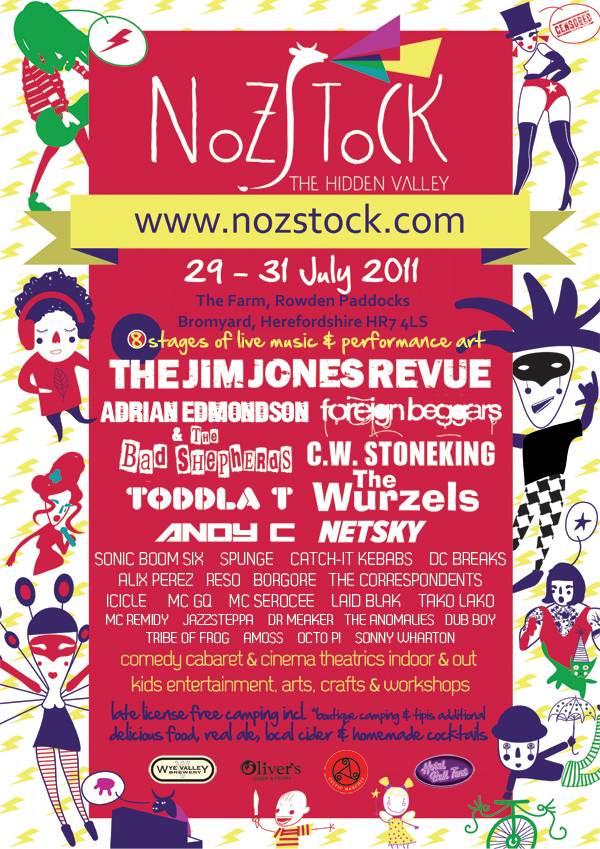