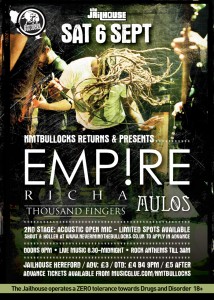 Following a three year hiatus NMTBullocks gigs with be returning on Saturday 6th September and the first will bring us some spectacular acts. EMP!RE hailing from the South West and bringing with them their killer melodies and virtuosic vocals the band has been described by Kerrang! as ‘ The best new voice in Rock’.  Richa the four alt rockers, now residing in Brighton and London but you will be pleased to hear that they still call Hereford home! Thousand Fingers a four piece Delodic Rock band from Monmouthshire in South Wales.  Aulos are an instrumental two piece with Gameboys from Bristol and Hereford.

The second stage on the night will be dedicated to and acoustic open mic night. With limited availability if you are interested in putting yourself forward please get in touch via the NMTBullocks website or Facebook page to apply in advanced to secure your spot!

The night will open at 8pm with the music kicking off from 8.30 through until midnight followed by some Rock DJ’s taking the night through to 3am.