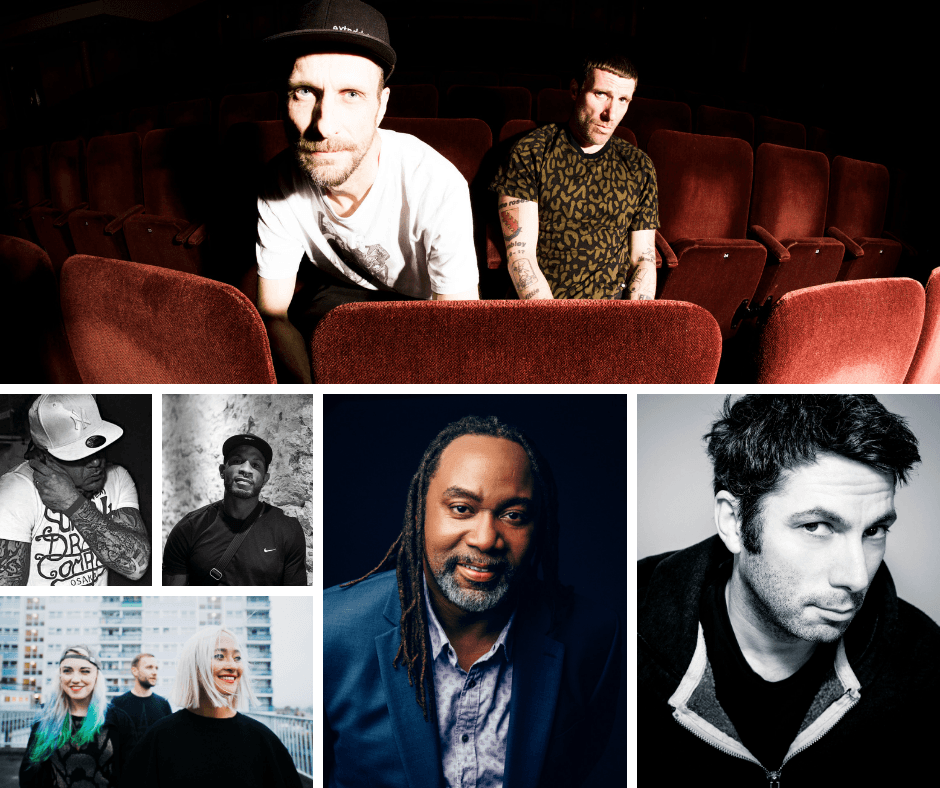 That’s right, Nozstockers. It’s time for us to share with you even more (I know) incredible acts that will be joining us at our 21st anniversary. So, without further ado, tap your ankles thrice and close your eyes, for your dreams are about to come true.

We are delighted to announce, that joining us this summer, headlining The Orchard Stage are working-class heroes Sleaford Mods. Fresh off the back of their epic UK tour, the Nottingham duo will be delivering snarky lyricism and gritty guitar solos that’ll knock your socks off. Segments of their new album Eton Alive are sure to make an appearance during their Friday night headline set. Amongst minimalist beats, wry humour and a hell of a lot of effing and blinding, the Mods will bring punk angst and sharp criticism of the Britain’s contemporary social and political climate. Arm yourselves with your best mosh-moves and prepare for some serious rage release.

Breaking hard-rock down to its purest form is Soeur – they’ve been broken and beaten down by their shared experiences on the fringes of British rock music, only to come back stronger each time. A brutal assault on the senses, the South West rockers rock riffs that are so substantial they’ve got their own postcode.

At the opposite end of the spectrum are Cape Town’s Stone Jets. Joining Soeur for the Sunday sessions, while they may sound like yet another English indie band from Manchester, the Stone Jets wrap up traditional African percussion in soulful, bluesy tones, making for the ultimate toe-tapping tunes. A real musical treat.

Yes that’s right, Jungle DJ extraordinaire Ed Solo is back again to bring some Amen breaks to the Garden stage. A Noz favourite, we just couldn’t resist inviting Ed to return and show us the mixing and selection skills that have made him an internationally renowned party-starter. D&B crew – let’s ‘ave it!

Walking the yellow brick road alongside us will be Kioko, using rhythmic melodies and strong lyricism to promote their message of realness and respectfulness over at the Garden Stage. Timbali Sound System will lend his local dub flavours, alongside Last Tree Squad – the seven-piece outfit from Hereford and Kent blending hip-hop, jungle and dancehall. Nobody puts baby in the corner, and nobody narrows Town of Cats into just one genre. This nine-piece blend Afrobeat and ska with lashings of Latino and a side helping of funk – delish.

Prepare to get schooled by Lyrix Organix & Natty Speaks – a pioneering charity promoting live music and poetry events for young people, with a top MC to boot. This group fly the flag for young lives, humanitarian causes and a love of the environment, meanwhile, the Ghetto Funk All Stars ft. Profit & Verbal Highz will draw you into their daring, hedonistic party of punchy boom bap and tongue twisting lyricism.

Bigging up The Bandstand is the rootsy, bluegrass folk of Uphill and Still, steel string acoustics from the beautiful Son of John and previous BBC Introducing artist Holly Redford Jones. Getting nasty so you don’t have to, will be the Seattle-based Naked Giant and scuzzed-out alt-rockers Leeches – both of which are bound to get you bouncing and sweating in the weekend sunshine.

We’re always up for a chuckle and this year is no different. Returning to Nozstock for 2019 we have the incredibly talented Reginald D Hunter.The sardonic American cum-honorary-Brit has been touring the UK for nigh-on 20 years, and can be seen on ‘Have I Got News for You,’ ‘8 Out of 10 Cats Does Countdown,’ and fronting his own show ‘Reginald D. Hunter’s Songs of the Border.’ Last year, he packed out the Dept. of Cultural Affairs and the Altered State hillside, and we are totally humbled that he wants to come spend the weekend with us again. If you missed him last year, this is the perfect opportunity to right that wrong!

Also tickling those funny bones at The Altered State for our 21st season is funnyman Phil Kay, award-winning writer, musician and comedian Phil Nicols and London-born Dane Baptiste who has been hailed as one of the best new acts in recent years.

Captaining the laughter ship is our favourite MC and comedienne Jayde Adams – the unruly Queen of social satire, musical interludes and queer characters.

Just as the name suggests, Stoned Cherries are a fruity and lively folk roots band from Bromyard bringing their signature sound to the stage. Injecting brand spanking new will be the Bone Dry Records Showcase ft. CW Jones,covering all genres from blues to hip-hop, while So So Sun will take us sweetly into Sunday with progressive structures and conceptual song writing.

Takeovers rule the Bullpen this year, and we’ve brought an enormous arsenal of friends ready to bring the barn down. Gorilla Tactics and MINIRIG are joining forces giving the venue a brand new soundsystem for ya’ll to enjoy. Hailing from mid-wales Black House join us for Friday down on the farm with Boundary B2B Fujin ft. Illustratealong with Shook x Bassface ft Phibes.

Saturday brings us Rinse FM regular and UK funky originator Marcus Nasty  who joins us to celebrate his birthday with us as part of the Durkle Disco Saturday takeover. Skank your head clean the following afternoon with the huge Rumble In The Jungle Takeover ft. Jungle legend, Remarc, a colossal B2B with Kelvin 373 & DJ Hybrid, and Bristol DJKamoh. More info on the takeovers coming soon!

Hanging with our two-tusked pals at the Elephant’s Graveyard on Friday daytime are Kaotik Kartel who bring us Ed Cox & Stivs joined by a massive daytime takeover from Gorilla Tactics. By night, the tunes turn to house music, with the biggest and best groovers in the business including Wax Worx, Ron Mexico, Roman Candles, Sandor, Groovekode and Milton Keynes massive Matt Brassington.

Sunday doesn’t slow down either, inviting Cardiff’s G-Bace, Mancunian Hobbs and legend of the Glaswegian underground scene Paul Flynn. With breaks as sharp as our elephant’s tusks, House Meanz House will bring an assault on the senses and Noz regulars Emotion return to takeover the Graveyard for an evening of old-school vinyl and classic rave anthems. We’ll bring the face paint.

Locked away in our Cabinet of Lost Secrets for 2019 are some of the wackiest and wildest with Rosebudelectronics, Kingsley Salmon and The Stiff Joints will slide into your DMs with their island-inspired ska and reggae and we defy you not to get jiggy with Olubundi – a master of West African moves like juju, highlife and waka. Expect funk-punking from Ask My Bull and funk-souling from Bristol outfit The Bare Souls.

Without getting too cheesy, we’re delighted to welcome back Hallouminati and their Greek-inspired party punk to the Cabinet and say a big hello to 7Suns – the multicultural smorgasbord of Spanish, English, Latino and Caribbean rhythms. While you could say Junkoactive Wasteman does what he says on the tin, we’re not entirely sure what that tin is; part man part rubbish bin, expect toxic lyrics, terrific Tinphonia tunes and a helluva laugh.

We hope we’ve whetted your appetite for the party to come and that you’ve got your red sparkly wellies at the ready because the road to Noz isn’t as long as you might think…with only 84 days to go we’ll be opening those gates in no time.