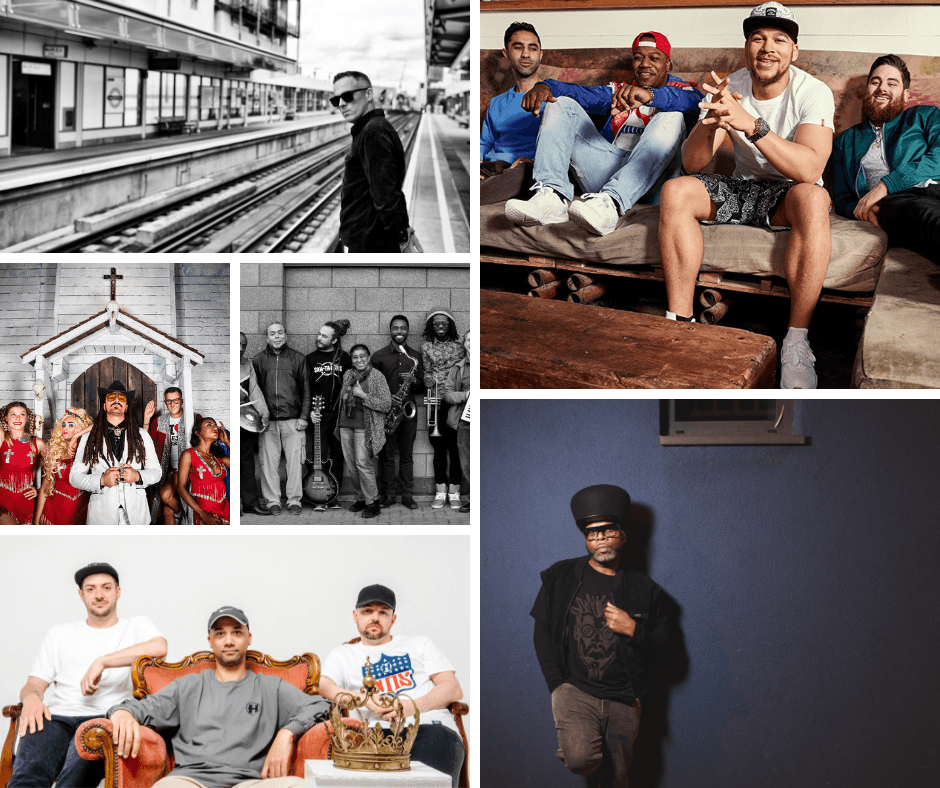 Grass as green as emeralds. The sun shining high in the sky. Trippy, technicolour décor. Kindly weirdos to join you on adventures who you’d never get to meet in the real world… Nozstock and the Land of Oz have a lot in common. You know what else they’ve got in common? Being full of banging tunes. While Dorothy has her predicament narrated in song by a cast of native munchkins, here on the Farm we’ve got to draft in an army of turntablists, drum-bashers, string-pluckers and singers to perform the musical backdrop to your weird weekend.

Luckily for you, we’ve gotten pretty good at this line-up thing over the years. Keep an eye out for hurricanes ready to whisk you away from your black-and-white reality to the fantasy of the Orchard Stage, whose humble boards will be hosting the award-winning multi-genre collective Rudimental, (DJ set) bringing the vibrant dance magic which has won them countless sold-out tours and headline slots.

Soul II Soul – who you’ll doubtlessly know from their smash hits ‘Back to Life’ and ‘Keep on Movin’ – will be keeping you moving throughout the summer evening. If ska is what you’re after then you could do a lot worse than The Skatalites, whose infectious sound spawned ska, two-tone, dub, rocksteady and reggae as we know it.

Get ready to wine with the best of ‘em with a set from dancehall master and all-round legend David Rodigan. Also gracing us with one of her iconic live performances will be Hollie Cook, one of the most highly-regarded names in reggae right now.

The beautiful lovechild of the King of Rock and the princes of grunge, Elvana, will showcase their inimical stylings. Rave-drunk beings from outer space, Henge, will be crashlanding to initiate us in the ways of cosmic dross aold onto your hats for the explosive dubby electro outfit King Kong Company. We thought you didn’t get enough of the Good Word last year… or the year before… so we’ve brought back the unholiest of holies who will be making you scream ‘Oh My God! It’s the Church!’ and down on your knees begging for more.

Leading the charge will be Zinc, one of dance music’s most respected pioneers who can boast genuine underground and mainstream success across the genres of house, breakbeat, UK garage and drum ‘n’ bass. Next there’ll be firm favourite DJ Randall, who brought Nozstock to a standstill in 2016 and is back to give you more of what you want.

Rising star Notion will be showing us all why he’s one of the most exciting figures in dance music today. Meanwhile, prepare yourself for an electric live performance from your favourite rapper’s favourite rapper, Dabbla, and raw live supergroup Pengshui, whose sound encompasses the best of grime, rap, dance, punk and metal.

One of the few British emcees who needs no introduction, Skinnyman has received wide acclaim from the UK hip-hop press, and no doubt you Nozzers will give him an equally warm welcome. One of the most exciting artists to emerge from the UK rap scene, Jam Baxter, will be shutting the stage down like there’s no tomorrow, while turntablist wizard A.Skillz will be serving up a unique musical cocktail blended with his distinctive funk sound. Forgot to pack your bass? Don’t worry, mixmaster Featurecast will be bringing more than enough to go round, while born entertainer Turno will create a journey for you with his skillful drum ‘n’ bass, quirky humour and playful antics onstage.

Finally, because we love to give the stage over to the people at the top of their game, we’ll be hosting independent Bristolian record label Boom Sound for a takeover, including multi-talented producer, mixer and DJ Prince Fatty & Horseman, infectious lyricist Gardna joined by party anthem machine Eva Lazarus.

If you need somewhere to take shelter from a horde of flying monkeys, hurry on over to the Cubicles, our premiere converted-cowshed-dancefloor and the best place to catch some filthy drum ‘n’ bass. It’s our privilege to once again be hosting game-toppers Hospitality and their array of hand-picked drum ‘n’ bass talent for a takeover which is bound to get messy.

Pioneering drum ‘n’ bass collective Kings of the Rollers will be showing the farm what they’ve got, and the Byrd is the word when it comes to one of Hospital Records’ first signings, king of the dancefloor Danny Byrd. Named one of the top 20 producers in 2013, Keeno has only gone from strength to strength since, and he’ll be showcasing his broad and versatile style for you in 2019. Finally, put your hands together for a warm Nozstock welcome to one of the newest members of the hospitality family, Unglued, one of the hottest names in the drum ‘n’ bass circuit right now. This rowdy lot’ll be joined by the genre-spanning and boundary-pushing MC Inja.

Saturday will see a legendary back to back set from drum ‘n’ bass greats Shimon and Benny L, as well as a takeover from supreme tastemakers and Noz residents Nu:motive. Triple threat DJ, producer and label owner AMC will be demonstrating his carefully honed craft and technical articulation. Never one to miss a good party, the infamous Ed Rush – who has repeatedly changed the face of drum ‘n’ bass – will be down to show us how it’s done. It’s a dog eat dog world, and Kanine – the ambitious young producer credited with pushing Jump Up into the mainstream – is ready to kill – one to watch ‘coz the only way he’s going is up.

When you want to kick off your ruby slippers and relax but keep the music coming, make your way through the Dingle to discover the Bandstand. If you want to say smugly that you saw ‘em before they were big, this is the stage for you.

Bristolian bluegrass extraordinaires Medicine Creek will have you stomping your feet to their unique brand of old-time string band sound, while noisy post-hardcore lads Frauds make music which is a mix of danceable, fun, and downright angry. Guitar-driven indie four-piece Rainbow Maniac will have you dancing like you’re a teenager in the heady days of NME again, and be prepared to fall in love with up-and-coming alt-folk Wunderkind Sam Brookes.

Cardiff-based birds Buzzard Buzzard Buzzard are influenced by ‘70s glam rock and advise that their music should be listened to ‘ironically’, while Dylan Thomas enthusiast singer-songwriter Pierre Donahue draws on the likes of Nick Drake, Bob Dylan and Townes Van Zandt for inspiration, all with the distinctive lilt of his home country. Fans of all things folklore and fearsome will want to catch shoegaze slacker rock-inspired outfit Wych Elm, and if you do one thing all weekend, make it down to the ‘Stand to catch Nottingham’s finest emerging art-rockers Do Nothing.

The bravest among you may wish to extend your quest further to the west of the Land of Noz, following in the footsteps of giants to find the Elephant’s Grave. The latest addition to the farm, the Grave has been open since 2017 bringing you the finest in dub and reggae by day and deep dark house and techno when night falls.

Nozstock regulars Subwork will be returning with a bass-heavy takeover featuring Garden Stage curator and Brap FM regular Tenz, turntablist Revrt and the versatile, hip-hop entertainer Natty Speaks. We know that Data Transmission are just as passionate about dance music as we are, which is why we’ve handed them the reigns for a Friday-night takeover full to the brim with the best dance music-makers, for your delectation.

Whartone Records, the brainchild of Noz fixture Sonny Wharton – will be celebrating their 10th birthday in style, with a takeover representing the freshest faces and the tried-and-tested favourites of the UK house and techno scene. The man himself will be flexing his skills, along with house heavyweights Dom Kane, Dirty Secretz, and Luke Stanger.

Those of you who have experienced the Cabinet of Lost Secrets will know it needs no introduction. If you’re looking for a skank you’ve come to the right place, with sets from reggae and hip-hop influenced six-piece Lobster who plumb the depths of ska, dubby punk and everything in between.

Electro-soul pioneers Happy Daggers will be inducing some serious dance moves with material from their as-of-yet-unreleased debut album, while festival favourites Punch The Sky will sweep you off your feet with one of their now-infamously-energetic, world-music-influenced live shows: resistance is futile. Described as ‘The Streets meets Joe Strummer’, Birmingham-based spoken word artist Joe Cook will be delivering incisive social commentary in his unmissable rhythmic style.

To listen to some lovingly curated samples of the best Nozstock 2019 has to offer – visit our Spotify page for playlists of our headliners and artists from the Orchard, Garden and Cubicles stages.

Phew – that’s it for now Nozzers. Hopefully that’s enough juicy news to tide you over for now, but keep your eyes peeled for more over the coming months. We’ll be seeing you pretties in the summer, somewhere where bluebirds fly…