Like a rose between two thorns, nestled between our lovely farmhouse and the Orchard is the Garden Stage. This years line-up promises to be a surreal display fit for Dali himself; spanning all genres from throbbing dance and funk to hip hop, blues, rock and acoustic musings. The Garden Stage is sure to unbury your desires for a late night dance to some filthy beats.

Kickstarting the bill is Krafty Kuts. Famed for his inventive combos and wily technical chops, the award-winning DJ is set to tear the roof off the Garden for Noz 2017! Krafty Kuts is a DJ you can trust to not rely on big hits or over the top theatrics; A DJ who’s still inspired by blowing people away with blue sky musical dot-joining through decades of dancefloor heritage and intense dexterity.

There’s heaps of drum n bass madness occurring in The Garden this year and it starts with the dynamic duo Hazard & Eksman. The incredible power of Hazard’s production has secured his place in the top echelons of drum ‘n’ bass producers. Having knocked out enough dancefloor bombs to be considered a serious sonic terrorist with anthems including ‘Busted’ and ‘Mr Happy’ Hazard has topped drum ‘n’ bass charts all over the world. He’s accompanied by MC Eksman; a multi-award winning MC and the man behind the massive Overload & Award winning Next Hype parties.

Next up (phew what a line-up!), Ocean Wisdom will be spreading some wise words with his blend of genre-merging flows and thought-provoking lyricism that have secured his unprecedented takeover of the UK rpa scene. Versatile and with unparalleled creativity, his stage presence has shut down main-stage crowds of over 10,000 people. Also joining The Garden rap party is Dabbla with Illman + DJ Frosty. Simply put, Dabbla is your favourite rapper’s, favourite rapper, he has proved himself to be one of the UK’s most valuable and original assets to Rap Music. He’s joined by DJ Frosty and Illaman, a versatile vocalist with an ability to flow over any style 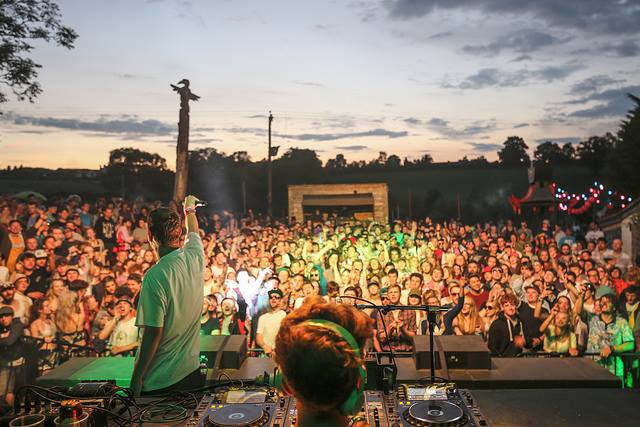 Described as “Wu-Tang meets the Happy Mondays” by FACT magazine our next act needs no introducing and if you’ve got your finger on the pulse you will already know about the Levelz crew from Manchester. Consisting of 8 MCs and a 5-piece live band Levelz is a super-group of Manchester’s finest producers, creators and party animals. The 14 strong music collective have just completed a UK Tour generating hype all over the UK and are bringing the party down to the farm for a special set recorded by DJ Mag. Since starting in 2013 they have showcased their talents on Channel 4, Radio 1, Rinse FM, Radio 6 Music and 1Xtra. We assure you Nozzers that the Levelz crew know how to throw a party, this is not to be missed!

Glasgow based soundsystem and production unit, Mungo’s Hifi, will be serving up a serious mix of chilled out beats and reggae bass lines of seismic productions. Expect democratic dancehall fun and quality sounds perfect to get you up on your feet.

‘Well big up all the original junglist massive. The original dancehall junglist dere. General Levy alongside the M-Beat. The world farm is in trouble.’ (We hope not!) After more than 20 years on stage, General Levy will be sharing his internationally acclaimed mix of jungle and reggae with us. Festivals across the globe have been conquered by the extraordinary talent of General Levy. Now it’s Nozstock’s turn.

Benny Page is joining the D&B party with his tight production, heavyweight dance-floor tracks and clinical mixing skills. Storming onto the scene with his 2006 anthem ‘Turn Down The Lights’ he’s gone on to release numerous well-received productions across the dance music spectrum. The Freestylers will be bringing their 20 years of experience with them to this year’s festival too, along with their ever-eclectic-style and renegade approach to production that focuses on everything in the bass music spectrum – designed for maximum dancefloor devastation.

Bringing the old school hip hop beats, we have Goldie Lookin Chain (Legends Set) and Rodney P & Skitz. In 2016 Rhys from Goldie Lookin’ Chain, Eggsy and DJ Killer Tom started a new show – Legends of GLC. It’s a old school hip-hop set up with a scratch DJ, video projections and all the best Goldie Lookin’ Chain anthems. In the words of Eggsy, it’s “a mix of stand up hip-hop and a powerpoint presentation.” (We’re pretty sure it won’t be your average powerpoint.) This legendary performance will be followed by UK hip-hop powerhouse Rodney P & Skitz; with award winning releases, remixes for the likes of Roni Size and a Radio 1Extra’s flagship hip-hop show under their belt, the duo are iconic figures who have played all over the world.

Finally, bringing a bit of Dancehall into the mix we have the ferociously fast chatting Chanelle Williams a.k.a Lady Chann. Responsible for bashment classics such as 2009’s ‘Your Eye Too Fast’ and 2010’s ‘Sticky Situation’ which earned her plaudits from the likes of The Guardian and Clash.

But that’s not all! See exactly what else we’ve got growing in The Garden for Noz 2017.