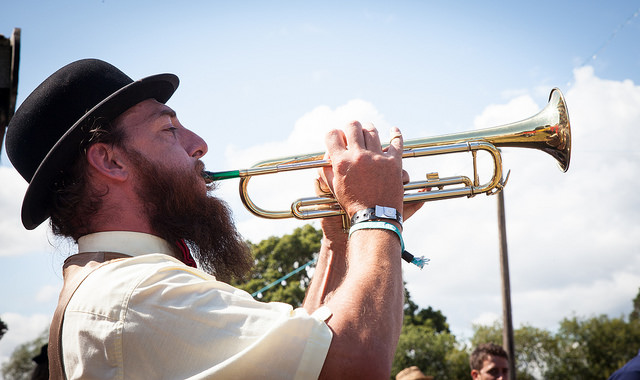 Each year, the Bandstand enlivens our hilltop with a myriad of discovery and wall-to-wall (all three of them, that is) uniqueness. Our curious curators explore the eclectic scape of new and unsigned acts and bring them to you, our wonderful Nozstockers, for your viewing and listening delight.

Joining Youth, Boy Azooga, Andy Jones and Passion bel Canon we welcome the hypnotic, Keto. Likened to Cat Power and Elliot Smith, Keto have an oner lo-fi folk sound revered by BBC 6 Music, Drowned in Sound and Clash magazine. Having played shows alongside Sun Kil Moon, Lower Dens and Eaves, we can’t wait to have the celestial talents of Leah, Midds, Rob and Matt on our Bandstand stage.

Adding to the roster and described by the Line of Best Fit as having a ‘fun, vibrant energy that only comes from a group of friends jamming on what comes naturally’, Yassassin are a five-piece, alt-rock assembly comprised of members Anna, Joanna, Moa, Raissa & Ruth. Recognised for their fervent lyricism and rebellious riffs, Yassassin’s debut EP ‘Pretty Face’ produced by Dave Ellen (The Cure, Neneh Cherry, Depeche Mode) gained the Neu Pick spot in DIY Magazine upon release and their preceding track ‘Social Politics’ has a sense of invocation to irreverence and ideology. We can’t wait to get worked up with Yassassin.

Characterized as “shambolic, heartfelt, ludicrous pop” by their producer, Bruno Ellingham (Massive Attack, The Maccabees, Goldfrapp), next up we have Bristol based five piece, Goan Dogs. After recording a session at the legendary Rockfield Studios and new release You Drive Me Wild, we can’t wait to witness, in their own words ‘some bangers’, ‘elastic dance moves’, ‘stories of love, trickery, fraud and dickery’. We’re not finished yet, Nozzers! Taking to the Bandstand stage we have Frauds, an energetic, over-the- top duo comprised of Chris Francombe (drum/vocals) and Mikey Alvarez (guitar/vocals). The band combines thick jagged riffs and beats with a mixture of humour and anger in equal measure. Over the last few years Frauds have shared a stage with Kagoule, USA Nails, Slaves, Queen Kwong and many more. Corr!

Coming to fill your ear and eyeholes, we’ve got the thick and fuzzy alt-rock sounds Beverly Shrills. Originally from Tewkesbury but now gaining momentum around Bristol, the sound is influenced by the likes of The Flaming Lips and Tame Impala. Debut single ‘Space Invaders’ was released earlier this year (pssst, go have a listen…it’s ace!). Also ace…is the Josh Ace Band (see what we did there?) who will also be partying on the Bandstand stage and bringing us Welsh pop meets pseudo Americana. Josh Ace tells tales of derailed dreams, dissolute companions and life in the times of social media and virtual collective consciousness. Humour, cynicism and psychedelia…what more could you want?

Here at Noz we do love a collaboration and that’s why we have three stage takeovers on the Bandstand this year.
Firstly, we welcome the wonderful Music Pool with their Best of Livewire Project. Founded in 1998, The Music Pool is a community based music charity for Herefordshire and it’s borders. The Music Pool are dedicated to providing chances for people of all ages and abilities to make music together, because it is one of the most powerful ways to improve people’s lives and well-being. Their work affects a wide variety of groups from early years to those with special needs. You can catch the best of their Livewire youth music project right here, which gives teenagers an insight into the music industry, organizing training opportunities, music courses and gigs.

Our second takeover is by the mighty BBC Introducing Hereford and Worcester featuring Capas, Ellisha Green, Invincible Youth and Karyo. We’re in for a real treat with this lot….Capas aka Phil Wilkins is a multi instrumentalist and producer based in Worcestershire, focusing on electronic and live recordings to create a cinematic sound. Influenced by the likes of Bonobo and Sigur Ros, Capas debut album, Undisclosed was released December 2016. The album was heavily supported locally, whilst track Bamboozle has received Radio One airplay. An aspiring 17 year old singer/songwriter from Kidderminster, Eliisha Green has just released her debut EP called ‘Platforms’ in November 2016 and has received great reviews on iTunes and Slap Magazine. She won Wyre Forest Young Musician of the year 2016 and has achieved Best Composition and Solo Singer as part of Bewdley Youth Festival. She performs frequently at places such as Hopfest in Bewdley and Dudley Beer Festival. Sam Butterworth and Callum Real are Hereford based Indie-electro duo Invincible Youth. Working hard to make music their way of living the boys have just released their ‘From The Light’ EP and have a UK tour planned this year. Their influences are varied, everything from Churches and Glass Animals to Slipknot and Nirvana. Last but as lovely as the rest, Karyo are a three-piece post-pop sample-funk band based in North London, via Worcester, comprised of three long-time friends and collaborators: Duncan Powell, Luke Fain and Tom Guilding. Their talents concentrate on eclectic instrumental music, with guest vocals becoming a key feature of their sound. No stranger to festivals, their second ever gig was at Glastonbury 2016!

Rounding up our announcements we are as dizzy as Gillespie to reveal that the Bandstand will swing into a rhythmic fusion of all things jazz, with more bluesy beats than you can shake a saxophone at on Sunday afternoon with our Bluejay Jazz Lounge takeover featuring Remi Harris. Remi Harris is an exciting young guitarist whose unique style draws inspiration from Gypsy Swing, Jazz, Blues, Rock, Heavy Metal, Electronic and World Music. He has toured worldwide as well as performing at Buckingham Palace, Montreal Jazz Festival, BBC Proms at the Royal Albert Hall with Jamie Cullum, on BBC 4 Television and live on BBC Radio 2 and BBC Radio 3. Primarily self-taught with the help of his Dad’s guitar magazines and records, Remi started playing at the age of 7, initially inspired by rock and blues guitarists of the 60s and 70s such as Jimi Hendrix and Jimmy Page. In his late teens he developed an interest in jazz music, in particular artists such as Django Reinhardt, Wes Montgomery and Stan Getz. Since then he has been growing a reputation for blending all of his influences into his own individual style of playing. Only 29, Remi already has a string of awards and chart success under his belt, plus endorsements from some of the biggest and best in the industry.

WOW. Is it July yet?