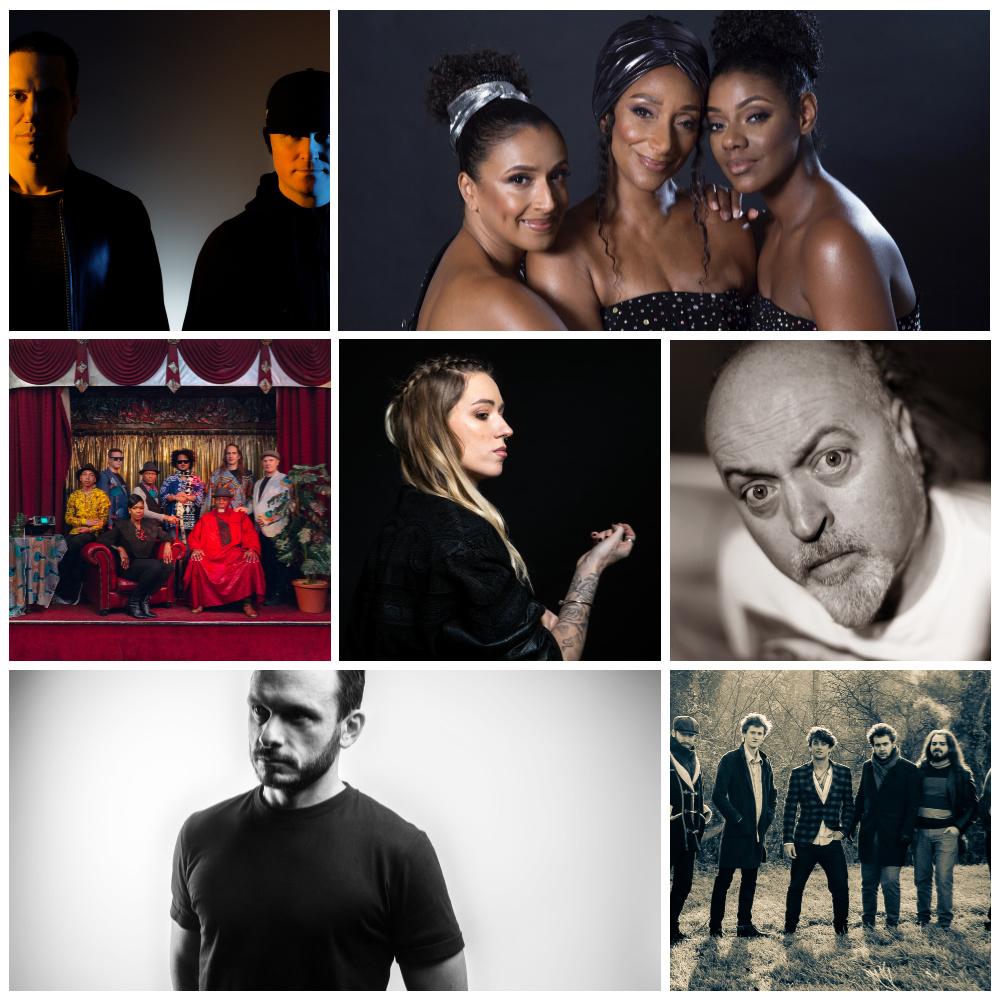 At NozHQ we never do things by halves, and this year is absolutely no exception. Venture off the beaten track with us at Nozstock this year, as we see a total transformation of our farm’s true state. From ancient, underwater cities, lost from the world many moons ago, to extra-terrestrial life in a new, unturned corner of space… the enticement of The Great Unknown is hard to resist, after all, is there anything quite as exciting as the voyage of discovery?

But of course, the question on everyone’s lips is; what musical acts have we been gathering to perform on our legendary stages? Well, secret’s out Nozstockers, let’s go…

Dazzling our Orchard Stage this year are Sister Sledge, who soared to success in the height of the disco era. They will be bringing life and soul to the farm with their chart-topping singles ‘We are family’, ‘He’s the greatest dancer’ and ‘We’re lost in music’. Have those disco balls at the ready Nozstockers, because this family are going to get you into a spin.

All hail the King of drum and bass, Andy C, who returns to headline with MC Tonn Piper. Currently at the top of his game, Andy C has sold out Wembley shows and a reputation for his three-deck mixing and double dropping antics. However, if it’s an amalgamation of jazz, rock and metal you’re after, classically trained comedian Bill Bailey and his musical musings is the one for you.

The raucous, nine-piece collective Gentleman’s Dub Club will also be taking our stage by storm. Contagious with high-energy, this group has dub, ska and roots reggae in abundant supply. Submotion Orchestra will be captivating you Nozstockers, with their genre-defying fusion of electronica, jazz, soul and dub, all lead by Ruby Wood’s dream-like vocals.

Afro-funk band Ibibio Sound Machine, fronted by the fabulous Eno Williams, will bring foot-stomping, booty shaking and a perfectly synthesised sound of a concoction of genres. Self-describing their show as ‘Great Gatsby-meets-techno rave’, The Dutty Moonshine Big Band will be putting on the party of the century with explosions of jazz, garage and grime.

More of our Orchard Stage acts can be found here.

A post-apocalyptic landscape is all that’s in view. We wade through a thick and bubbling toxic wasteland with only unrecognisable mutated beasts at our sides. The Orchard Stage is long behind us, for we have ventured into a dangerous new realm. But whatever you come across here, it’s welcomed by the all-embracing Garden Stage. The place you’ll find an eclectic mix of DJ’s and bands to fill that alternative fix.

Technical wizards and dnb powerhouses Calyx & TeeBee will be pulling out all the stops, supplying us with a fully charged six-deck set this year, joined by LX One on the mic. Having more than 15 years in the game, we can expect to hear a set jam-packed with the genre’s most loved classics and freshest tracks. Next, we have Flava D, who will be effortlessly blending the very best of garage and grime with a just spoonful of sugar to make those sturdy bass lines go down a blimmin’ treat.

Fanatics of sound and music production, Mungo’s Hi Fi, are set to make another unforgettable appearance at Nozstock this year. The Glaswegian posse, who have collaborated with musical icons Prince Fatty and Eva Lazarus, are trailblazers in forming their unique mix of reggae/dub/dancehall.

Producer and rapper Dirty Dike and DJ Sammy B Side’s filthy beats and quick-to-whip wordplay will get your veins pumping and your feet jumping, while Stanton Warriors will be carrying on the bodacious party they began since they broke onto the scene over two decades ago. Not to mention, the ever evolving dnb chameleon, Dillinja, will also be hitting the turntables over the weekend.

They say bad things come in threes, but for these hip-hop heavyweights that couldn’t be further from the truth. Having all held their torch to the blazing fire that is the Uk’s Rap scene, Rodney P, Ty and Black Twang have united to form the supergroup Kingdem. Gifting you with razor-sharp lyrics and unmatchable rhythmic beats, you’ll be witnessing the very best of Britain all on one stage.

Find out about more acts on the Garden Stage here.

Enter the cave where time has no meaning, if you step foot in there, you’ll have no way of leaving. That’s right Nozstockers, next stop is the Cubicles, otherwise known as our beloved cowshed. Bursting to the brim with filthy drum and bass and hosting some of the very best DJ’s that the world has to offer, it really is no wonder that time seems to stand still.

First to lift the lid off our Cubicles roof is one of dnb’s most prolific producers, Break. Having over 15 years to perfect his sound, Break has been widely respected in the industry for maintaining the highest quality and consistency to his music.

Dubbed by Andy C’s RAM Records as being “…the drum & bass scene’s most ground-breaking producer.”  Culture Shock has become synonymous with diversity and pushing musical boundaries and is set to bring a showcase of his versatile style to the farm. Joining him on the list of renowned turntablists to perform this year is new kid on the block, Kanine. If you think his younger age would mean he’s of lesser skill, you’re wrong. Wrapping up his biggest year yet in 2019, Kanine released over 10 original productions on a variety of labels and he’s set to do more in 2020.

Returning for another year on the farm, firm Nozstock veteran DJ Randall will be providing a set with full throttle basslines. Rising up in break-neck speed is Bou, with his debut set on the farm for all of you jump up/jungle lovers. And finally, for those who wish to be entered into an entirely new stratosphere of dnb we have fusion enthusiast Levela, who has imprinted his very own heavy sound to the genre.

And if that wasn’t already enough for you all, we’ve even managed to get a sneaky little secret set in there too! Find out more about our Cubicles line-up here.

Perhaps the place where you’ll discover the most diverse and experimental acts in The Great Unknown, is on our Bandstand. Located within The Dingle, the Bandstand is full of newly discovered, unsigned acts that are hot-to-trot right now. If you see them hit the big time in a couple of years, remember to say that you saw them here first…

If you’re in need of an indie fix over the weekend, Hotel Lux are your gang. Portsmouth-raised and now London-based, the group have quickly become one of the most talked about bands on the scene with their gnarly sound and gritty lyrics.

Welsh girl-group, Adwaith will supply post-punk angst by the shed load, with their carefully crafted lyrics in their native language. Whereas singer/songwriter, producer and multi-instrumentalist, Francis Lung, will be sewing together a variation of genres. From disco to soft rock, Lung’s music glides along without a hitch.

Dynamic duo, Frauds, take down fake news and fascism in the true name of punk. With lyrics steeped satirical madness, get ready for some serious head banging and guitar clanging. Birmingham’s own Sunshine Frisbee Laserbeam is one for all of you riotous souls, packing a punch with heavy riffs and a psychedelic take on punk.

Find out more about our Bandstand acts here.

Delving into the deepest and darkest corner of the Hidden Valley, you’ll unearth our latest addition to the farm; the Elephant’s Grave. When the sun’s in the sky, expect the highest quality of dub and reggae acts, but as the darkness settles, this space is only for the most courageous of explorers. Once again, we have collated the very best from house and techno, where things really will be going thump and bump in the night.

Since the very dawn of house music, Utah Saints have been makers of EDM. Their anthems are filled with the dreams of old-school ravers; think swirling synths and stomping bass lines, all the components required to get a dance-floor moving. Plus, having over a quarter of a century to perfect their sound, they’re always going to hit that sweet spot.

Sky-rocketing through the UK house and techno scene in recent years and firmly placing himself on the map as one of the UK’s finest DJ’s/producers and, Sonny Wharton. The firm Nozstock favourite is set to deliver another one of his world-renowned, high energy and diverse track sets because we just can’t get enough.

We also have bona fide expert in all things technical, Dom Kane, showing us exactly why he’s the master of music production. Not to mention, house heavyweight Dirty Secretz is set to return to the Grave with his spine-tingling unification of sounds and styles, making him one of the most unique house DJ’s on the block.

Find out more about our Elephant’s Grave line-up here.

Blink twice and you’ll miss it. Hidden underground, the Cabinet of Lost Secrets is our most mysterious stage, full of twists and turns, surprises and guises and doors that will lead to anywhere. The melting pot of the biggest variety musical performances, you can expect the unexpected from this lair.

Well-known within the festival circuit we have beat-boxing extraordinaire, Hobbit. In a jaw-dropping performance, he will be showing us how he’s found himself on international tours and why he’s a musician in his own right.

The Social Ignition will be returning, with their riveting and eclectic mix of styles and instruments. Each skilful member of this ska-fusion band contributes to its diverse sound, whether it be hip-hop, jazz, rock or funk. Whatever this group conjures up, there’s a little bit of something for everyone. And bringing the soul all the way down from the North, are Young Jack, a funk phenomenon with the freshest sound in the business.

Find out more about the Cabinet of Lost Secrets here.

And that’s a wrap! For now, at least… make sure to keep those ears to ground for even more announcements over the coming months. We cannot wait to see all of this lot performing in what is set to be the wackiest and weirdest Noz to date. See you for our biggest adventure yet in The Great Unknown…

If you can’t wait until then, make sure to check out our Spotify Playlist here, where we have cherry picked the very best songs from our incredible 2020 line-up.