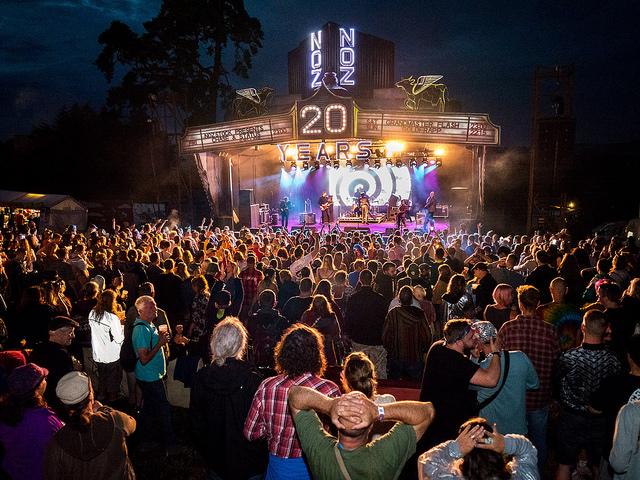 Dust off those red ruby wellies and begin to make your way down the yellow brick road, for it’s not long until you’ll be entering the magical Land of Noz!

Here at NozHQ, we work relentlessly to gather the very best live artists, performers, show-stoppers and feet-stompers from far and wide to appear on our beloved Orchard Stage – and 2019 has been no exception. We have picked the crème de la crème of acts – just for you!

So, without further ado, behold the musical wonders that will appear on the Orchard in only a few months time…

We are delighted to announce Rudimental as the first act we welcome to the Orchard Stage. Making waves with their music since 2009, the Hackney-based boys have skyrocketed to the top of their game, holding a No.1 album in ‘Home’, a BRIT Award and a Mercury Prize nomination under their belts. Working an urban fusion of reggae and soul into their sound, Rudimental have also mastered the art of collaboration, working with the likes of Ed Sheeran, Anne-Marie and Jess Glynne – some of the very best and biggest names the industry has to offer. Known for delivering outstanding high energy performances, it’s no surprise that these guys have headlined many major festivals before.

Next up, we have soul and dance legends and international chart toppers Soul II Soul. With over 10 million albums sold worldwide, Soul II Soul stormed the 90’s with smash hits ‘Back to life’ and ‘Keep on Movin’ catapulting them into superstardom and household-name status. We’re delighted to have them gracing the Orchard Stage with a dance-conjuring experience that has permeated throughout their live performances and recorded music for over thirty years.

Promising a performance that will pack a punch, our Friday night headliners Sleaford Mods will be shutting down the Orchard Stage like you’ve never seen before. Made from the bones of Andrew Fearn’s beats and the flesh of James Williamson’s vocals, this electronic punk duo create minimalist beats fully charged with humour, politics and profanities. As well as producing their own critically acclaimed records, Sleaford Mods have collaborated with some of the very best names that electronic music has to offer, including Leftfield and The Prodigy. Having just released their latest album Eton Alive on their record label ‘Extreme Eating’ and just out of an extensive UK tour, these are guys ready to get in your face with some serious punk angst!

Joining them in experienced party-starters we have Britains leading authority in all things reggae and dancehall, David Rodigan. After being in the broadcasting game for over forty years, David ‘Ram Jam’ Rodigan has cemented his legendary status with an unbelievable worldwide touring schedule, ground-breaking radio shows, and has even been awarded an OBE in the process. A certified UK music icon, Rodigan’s energy and love for the music he champions transfers from him to audience, causing smiles from ear to ear.

Jamaica’s premier ska band since 1964, The Skatalites, are landing to play us their infectious brand of bluesy, jazzy ska that spread like wildfire around the island, subsequently spawing the entire genres of ska, rocksteady, reggae, dub, two-tone and 3rd wave ska. Pioneers in the purest sense of the world, The Skatalites maintain the same high-standards and innovation which has flown through their work since all those years ago – we’re so excited to see them on our stage.

Extra-terrestrial music-makers, Henge, come to planet Earth with one aim – to bring the rave. Henge’s incomparable sound is one that they call ‘cosmic dross’ – an eclectic mix of genres including EDM, synth and psychedelia. Bursting to the brim with intergalactic soundwaves and visuals, their performance is guaranteed to throw you into the stratosphere.

Returning to Nozstock this year, we gift to you the sensational voice of Hollie Cook.  Not one to place herself into boxes, Cook has carefully crafted a genre that she has labelled as ‘tropical pop’, a mesmeric reggae/electronic/synth mix and has previously teamed-up with legendary producer Prince Fatty to perfect her sound. Be simultaneously lifted and grounded by her music through dreamy harmonic vocal arrangements and sturdy rhythms. Whatever the weather at Noz’19, we know that Cook will be bringing the sunshine.

Who praises the sinners and punishes the saints…? Yes, Oh My God! It’s The Church return for their third consecutive year on the farm. Singing, strutting and showing off what the Good Lord has given them, they are set to bring even more commotion to the congregation. Non-believers be prepared for blasphemy, debauchery and baptisms of absinthe – it’s the faith you’ve always wanted to follow. Get ready to confess your deepest and darkest secrets to this Church, because in the wise words of the Reverend ‘If you don’t sin, Jesus died for nothin’.

Ever wondered what would happen if Elvis joined forces with Nirvana? Witness it for yourself, as rock ‘n’ roll-meets-grunge band Elvana, who will be hitting our Orchard Stage this summer with some serious head-banging and hip-swivelling action. Unapologetically mashing up genres by splicing the King’s and Cobain’s best work, Elvana are what people are calling a ‘stroke of absolute genius.’.

Fresh out of Cape Town are afro pop-rock band, Stone Jets. Made up of Given Nkanyane, Manfred Klose and Jeanre Leo, Stone Jets first started making waves in the industry with the release of their debut EP River in 2014. Since then, Stone Jets have been perfecting their multi-cultural and genre-bending sound by drawing from a range of influences including African music, soul, rock, folk and classical. With rhythms to make your toes tap and vocals to make your jaws drop, these guys are not to be missed.

If you fancy yourself a shindig at this year’s Noz, fist-pounding partnership Swampcandy are the band for you. The Maryland-based two-piece made up of Rueben Dobbs and Joey Mitchell bring a raucous good time of hand stompin’ and foot clappin’ to their music, which is soaked in the primitive blues. Take a walk on the wild side with this pig drinkin’, whiskey eatin’ American music.

Putting the ‘pow’ in girl power, our next band are a femme-force to be reckoned with. Bristol based alternative pop-rock trio Soeur are already selling out grunge-filled gigs in and around their South West home. With a sound that is filled with shattering vocal lines, gnarly guitar riffs and 90’s nostalgia, Soeur will have you whipping your hair and banging your head like never before.

We can’t cram all the Orchard Stage acts on this page but if you want more details, take a look at our full line-up here. Don’t forget, if July still seems too far away, we have created an Orchard Stage playlist on Spotify for you to immerse yourself in until the big week arrives. See you all soon!