Join us Nozzers, at the Hereford River Carnival 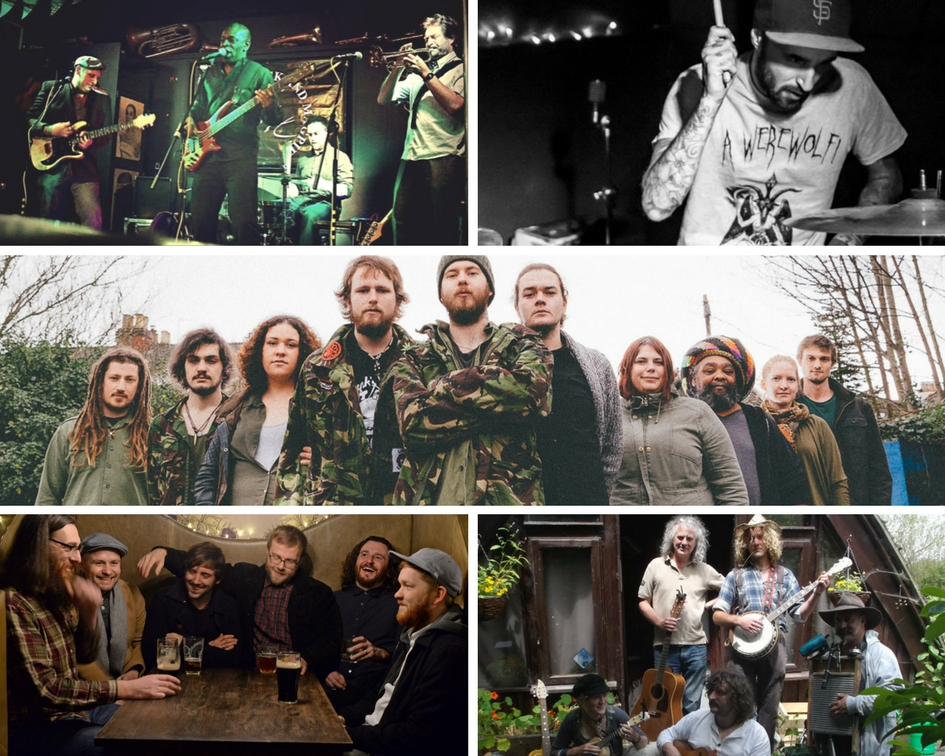 We’ve been busy bees down on the farm and we are very excited to announce that for the first time we will be joining the team at the fantastic Hereford River Carnival on Saturday 29th April to host our own Nozstock Stage.

The Carnival is a day of fun for everyone, celebrating the beauty and vitality of the River Wye and the life that it brings to the city of Hereford.

The River Carnival is run entirely by volunteers and has welcomed more than 12 000 people since it’s relaunch in 2014. Over 130 local groups are involved showcasing what Herefordshire does best. An amazing day of fun for the family, there is a street carnival, amazing puppet creations, an indie food village, the H.Energy green village, drink, stalls, children’s activities, floats and of course, some incredible music!

The Nozstock stage is showcasing some seriously funky artists, fun filled tunes and a sneaky peek of what to expect at The Hidden Valley this year:

The Woo Town Hillbillies are a collective of musicians playing fun-fuelled tunes from bluegrass to jug band music along with their own compositions.

Up beat raw funk & soul 6-piece from Worcester, offering up some energy to get you moving and shaking! With influences in Northern Soul, jazz, funk, soul & electronica, Desert Boots are an unstoppable funk force to be reckoned with.

Steve Strong is a one-man multi-instrumentalist specialising in sweeping soundscapes and heartfelt melodies that speak to the soul. His debut album, Three Hands Tall was four years in the making, blending elements of Math-Rock with heavy influences from Four Tet and Squarepusher’s instrumental albums. Strong creates a captivating and genre-defying sound that fills the room, painting the air with sonic pictures.

Cantaloop have always been able to adapt to the ever changing music industry volcano, yet they still retain their truly distinctive sound so whatever guise their music takes, you can still smell that funk! It’s part of their DNA and with it they’ve continued to deliver their jaw dropping live shows which are an infectious blend of funk-hip-hop-soul with floor-filling swagger that ignites and unifies crowds nationwide, and has done since the day they began!

King Solomon is a heavyweight Roots-Reggae band from southwest England. The 10 strong collective have been causing a stir in the live-music scene since 2013. This year, King Solomon marched onto the festival circuit coinciding with the release of the highly anticipated debut album, ‘Ceasefire’. To top off 2016, the band was chosen to be the backing band for the legendary founder of Aswad, Brinsley Forde for a number of UK shows. Without rest, the band are now working on new material and rehearsing a spectacular show for 2017’s performances.

Influenced by Roots-Reggae of the 70’s & 80’s yet original in style. King Solomon captures the essence of a genre whilst breaking new ground. Staring drum & bass lines pin down a blend of jazz and soul melodies as vocals bring about stark reminders of conflict.

Rob will be providing us some funky, family friendly tunes in between sets to keep the party going!

After an amazing festival in 2017, The Spare Room Arts crew will be joining us at The River Carnival supplying some amazing workshops and activities to keep little hands busy! Come and get creative with surreal mask making, making your very own kite, making a carnival banner and even a chance to dress up and play pretend as a carnival king or queen!

Clik Clik produces unique, creative entertainment for all kinds of events; taking the arts to the people, encouraging everyone to experience something different and more importantly, have fun! Their creations will be wandering around the carnival – watch out for Peggy the cleaner – she likes to make sure you stay spic and span!

We can’t wait! If July seems just as far away to you as it does to us, join us at Castle Green, Hereford on Saturday 29th April to whet your festival appetite!