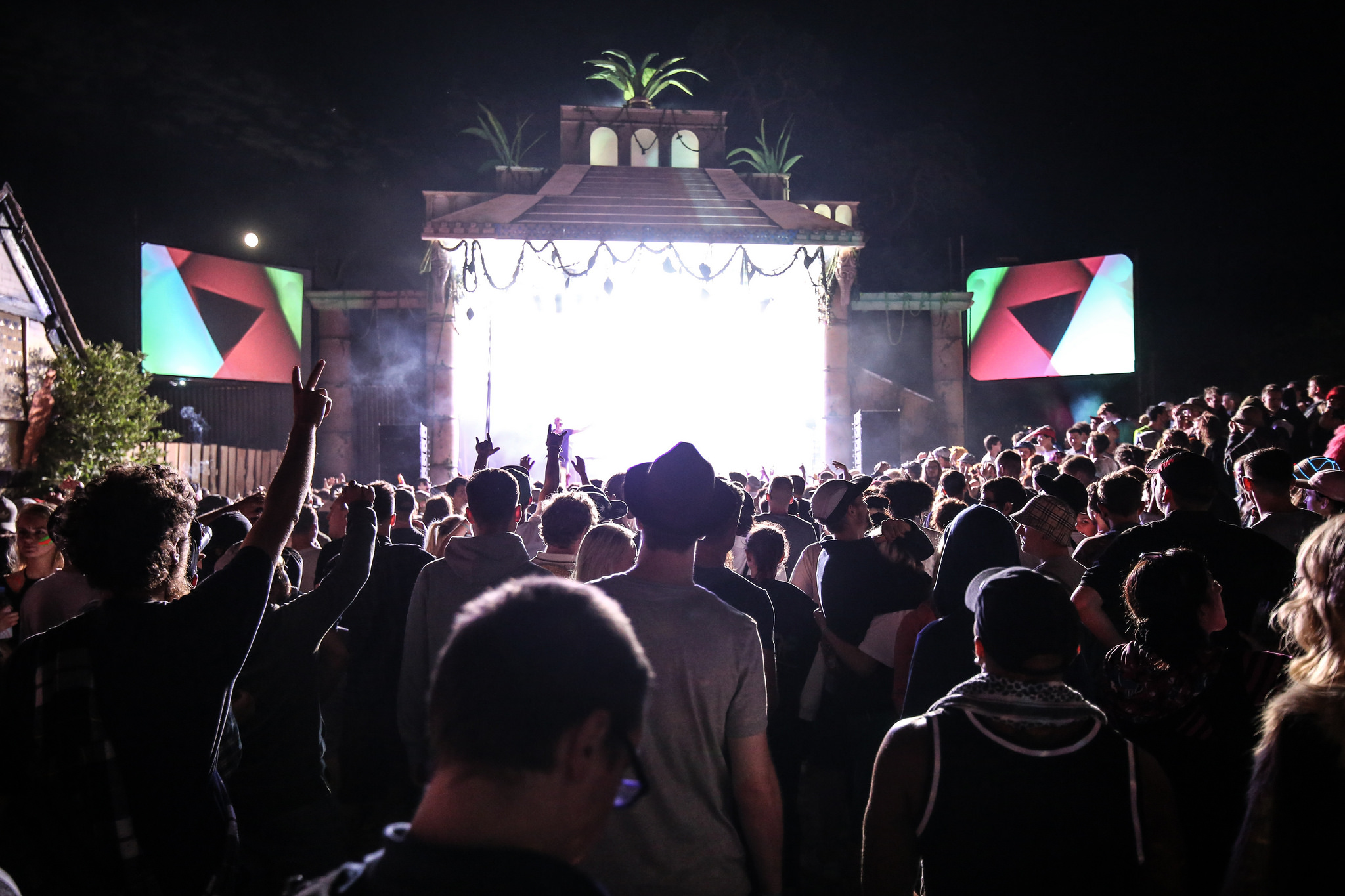 Nestled between our ramshackle Farmhouse and the Orchard Stage is the Garden Stage. To celebrate our 20th anniversary we’ve programmed a line-up full of internationally acclaimed party starters ranging from Funk and Hip Hop all the way to Drum & Bass alongside some of our long-serving Nozstock veterans. Believe us when we say you’re in for a treat… dust of your dancing shoes for this one.

At the top of the bill, with no need for an introduction we have the voice of a generation, one of Hip Hop’s innovators, the man himself: Grandmaster Flash. Hailing from South Bronx, this guys a true originator, he’s been in the scene since the early 70’s, when he developed a series of groundbreaking DJ techniques still followed religiously by selectors across the globe to this day. Known for his timeless dance floor classics such as ‘The Message‘ and ‘White Lines‘ and with an extensive back catalogue of records, sampling anything from Chic to Blondie and known for his electric, high energy live shows we can’t wait for the Grandmaster to grace the Garden Stage!

After the previous show they have put on for us, there was no way we couldn’t get Krafty Kuts & Chali 2na back to the Garden Stage for 2018. If you caught their set last year you’ll know.. if you didn’t then make sure you get to know! Expect nothing less than big breaks, funky samples and lyrical genius. Krafty Kuts has been a pivotal part of the UK breaks scene for a while now, with DJ sets full of energetic productions and technical turntablism he never disappoints. Joining him will be Chali 2na, hailing from LA and best known for his world famous Hip Hop group; Jurassic 5, Chill 2na is recognised for his quick delivery rapping style and energetic stage presence. The combination of these two artists creates the perfect recipe for a Nozstock party.

Next up it’s the legend: DJ Marky. With a career spanning over two decades, the Innerground Records head honcho is a veteran party starter and certainly knows how to bring the vibe. He’s been igniting dance-floors worldwide with his signature sound for years now and is showing no sign of slowing down. Producer of beat Drum ‘n’ Bass classics such as ‘Lk‘ and the more recent ‘Silly‘, he’s flying the flag for the Brazilian D&B sound and his sets are bound to put a smile on anyones face. Joining Marky will be none other than MC GQ another true veteran of the Jungle scene, known for his unmistakable and unique flow he’s been holding down races since day one and isn’t one of the most respected MC’s in the game for no reason. 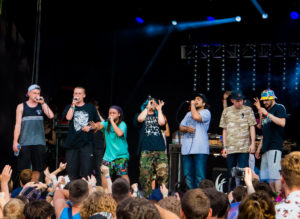 Now it wouldn’t be the Garden Stage without some UK Hip Hop and this year we have the Crème de la crème of the scene, headlined by Taskforce and Fliptrix. Taskforce are some of the UK Hip Hop originators, responsible for helping develop and influence the UK Hip Hop sound we know today. Fliptrix is again a pivotal figure in the scene best known for tracks such as ‘The High Way’ and ‘See the Sun’ as well as being the founder of one of the most important labels in the game, High Focus Records.

Verb T & Pitch 92 will be joining the Hip Hop crew showcasing their latest album ‘Good Evening’. Pitch 92, producer for Manchester crew; The Mouse Outfit alongside long time High Focus don Verb T was always going to be a wicked link up, if you haven’t heard it already we suggest you check it out here. Another showcase that we’re really excited about is Pengshui, a new crew made up of Prav (Foreign Beggars), Illaman and Submotion Orchestra’s Fatty, the combination of these three dons is something we can’t wait to see. Supporting will be some of the scenes best upcoming lyrical geniust including; CW Jones and his Bone Dry Records crew, boom bap four piece Verbal Highz and spoken word maestro Natty Speaks. 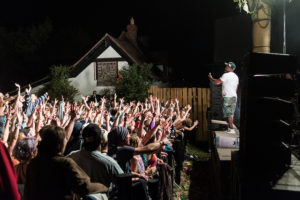 Joining the D&B crew we have one of the most sought after production duos in the Jungle/D&B scene, we’re talking of course about Serial Killaz. Having been in the scene for well over ten years now these guys have a stockpile of tracks each with their signature reggae influenced sound as well as collaborations with Rebel MC and Ms Dynamite and remixes for the likes of Skream and Toddla T, representing the new school, expect things to get heavy when Serial Killaz step into the dance. Representing the old skool will be Uncle Dugs B2B Billy Bunter, two kings of the Jungle and pirate radio scene, these two are both encyclopaedias of all things Jungle so make sure you don’t miss it Nozstockers.

Pretty much every sunday night headline set on the Garden Stage will go down in history and remains a highlight for Nozstockers far and wide. So this year we’ll be celebrating 20 years of D&B smashers by inviting some of our favourites to join and celebrate Nozstock turning 20 in style. Expect a big line-up….

Topping off the bill will be Nozstock regulars Sonny Wharton, Octo Pi and Dex alongside some special guests still to be announced!

Joining us all the way from London town it’s Kiko Bun, bringing his contemporary and refreshing sound focusing on Reggae, Soul and golden age Hip Hop he knows how to rock a dance floor and his rhythms have been infiltrating the mainstream music scene for a while know. As well as Kiko with have Gardna, a certified microphone controller will be bringing a set that blends all reggae flavours from Dancehall to Drum ‘n’ Bass, him and his label Boom Sound have been nicing up dances all over the UK and beyond in the past couple of years so trust us when we say it’ll be a lively one. Speaking of amazing vocalists, Collette the Dots will be joining the Garden Stage party, having featured on tracks with Skeptical, DJ Marky and many more D&B kingpins, Collette Warren is a big name in the scene, her and her eight piece band have transformed her tracks into a full live show and we can’t wait to see the outcome!

If you like your live dance music acts then you surely know about the live D&B enigma that is the mighty Slamboree Sound System. If this is the first you’ve heard of Slamboree then make sure you don’t miss their set at this years Nozstock and expect live dance music like you’ve never heard before, circus acts, pyrotechnics and special effects galore. Slamboree’s immersive, theatrical show is nothing less of a spectacle and will be sure to leave the hairs on the back of your neck standing up. 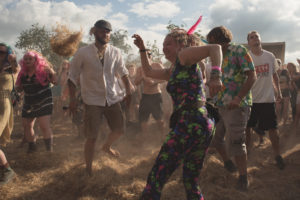 As always, Saturday night is all about the Ska Skank and this year we have guests including the Stiff Joints, ska-punk rockers [Spunge] and many more still to be announced so dust off your Dr Martens and get ready for a proper Ska party.

Also joining the Garden Stage lineup are a handful of bands and DJ’s that we just love and we hope you will too, ranging from the soul-hop crews; The Feel Good Experiment and Almatic alongside Yama Warashi, Rachel Dadd and Alabaster DePlume as well as DJ’s Chris Tofu and Revrt.