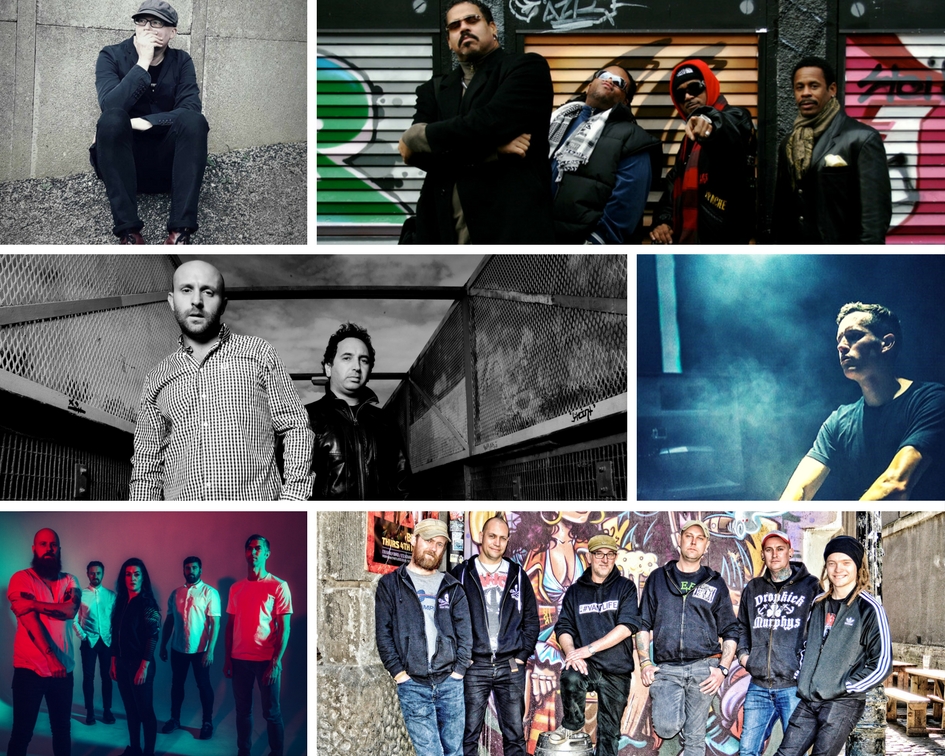 With the sun creeping over our Herefordshire horizon, we simply can’t wait any longer to give you gorgeous bunch your second line-up release, first up The Orchard Stage…

I said a hip-hop, hippie-to-the-hippie, the hip, hip-a-hop, and you don’t stop, a-rock-it-out, bubba to the bang-bang-boogie, boobie to the boogie, to the rhythm of the boogie-the-beat. No no my friends, what you hear is certainly not a test. We are delighted to welcome the guys with which you all wanna hang, The Sugarhill Gang. Named after Sugar Hill in Harlem, this old-school hip-hop troupe blasted into global charts with their 1979 single Rapper’s Delight. This pivotal tune is widely considered to be the song that introduced hip-hop to the US – hats off gents!

We’ve got another US super-group heading to the farm, but they’ll be crossing the pond with banjos, fiddles and a whole host of hilarity… say ‘Hey ’to Hayseed Dixie! Formed in 2001, Hayseed Dixie (a linguistic nudge to AC/DC) released their first album A Hillbilly Tribute to AC/DC and since, have single handedly created the genre ‘rockgrass’ through fusing bluegrass with comedy and reimagining a whole catalogue of hard-rock classics.

You may have guessed that if there is anything we love at Nozstock, it’s energy, loudness and uniqueness. You can imagine therefore, our excitement to announce that folk-Celtic-punk pioneers Ferocious Dog will be tearing up the Orchard Stage this year. This piercing punk outfit became the first independent act to sell out Nottingham’s Rock City in its 35 year history – and it sold out in 22 minutes may we add!

We also welcome to The Orchard a veritable smorgasbord of festival favourites including Le Galaxie, The Baghdaddies, The RPMs, Neck, SuperGlu, Mille Manders & The Shut Up, Ouroboros, Little Big Stuff, Mica Millar and Humdrum Express.

A short saunter from our Orchard, is the glorious Garden Stage and my, my Nozzers do we have quite the sonic selection for you…

First-up we welcome Levelz, the troop that have been generating hype across the UK and beyond with infectious energy since their inception in 2013. Being described as “Wu-Tang meets the Happy Mondays,” it’s clear that this crew is difficult to pin-down. The core group is made up of 14 MCs, DJs and producers. This diversity creates a sound that spans multiple genres from hip-hop and grime to drum & bass and dubstep, even featuring house and jazz vibes.

Next up, we’ve got comedy, rap royalty Goldie Lookin’ Chain, who have been pushing boundaries and offending grandmas since they hit the mainstream in 2003. In August 2004, their single Guns Don’t Kill People, Rappers Do, went straight in at Number Three, firmly establishing this crew as a cultural force to be reckoned with. Years later they are staying true to the band’s identity, with their latest album Pill Communication as controversial and explicit as ever.

After a 20 year career The Freestylers have covered a full 360 degrees in the bass music genre, achieving the kind of success most artists can only dream of. In addition to their status of underground heroes, they have gained commercial success with their global hit Push Up and have had their music synched in many TV commercials and films, including hugely successful comedy Zoolander.

For those of you who like their music funky over in The Cabinet of Lost Secrets we welcome Yusufla, Hallouminati, Hot Diamond Aces, Funky Navigation DJs, Beatwell & Dante, Rosebud, Calm Like A Riot, Mankala and The Discount Orchestra to the line up.

If seductive sass is more your thing, look no further than Velveteen Valley, hosting a bevy of cheeky beauties including Jolene Dover, Ursula Dares, Flossie Smalls, The Glitter Kittens and Jewel Personality.

The Bandstand has been getting in on the action too, we’ve got Yassassin, Goan Dogs, Keto, Frauds, Beverley Shrills, Josh Ace Band and a takeover of the best local talent with BBC Introducing Hereford and Worcester.

On Sunday afternoon we invite you to be as cool as Coltrane and feel as dizzy as Gillespie as The Bandstand becomes the Bluejay Jazz Lounge. Headlined by exciting young guitarist Remi Harris who has performed at Buckingham Palace, Montreal Jazz Festival, BBC Proms at the Royal Albert Hall. Summertime and the living will be eassssy….

And that’s not all that’s new this year, we are very excited to announce a brand new venue in The Hidden Valley. Elephant’s Grave is a haven for dub and reggae in the daytime and house and techno after dark. For you reggae lovers we’ve got Ital Sounds and Boom Sound pulsing out the rocksteady rhythms, for the house fiends amongst you we welcome Bristol based From Berlin With Love to host Friday night and Saturday sees Fatboy Slim’s favourite, Sonny Wharton take over with Forte. Other artists on the bill include Dom Kane, Dirty Secretz, Drumlove, Gardna and MadMax. Learn the story behind the new venue name here…

As if that wasn’t enough we’ve also added more amazing workshops and creative activities for your mini Nozstockers in Little Wonderland and experimental, visual collective Mash have announced the highlights in Wrong Directions Cinema with a selection of surrealist shorts, live A/V performances, and BAFTA winning films. There’s side splitting a plenty with a host of witty talent during Laughing Stock’s takeover of the theatre and curious sights, interesting debate and powerful poetry lurk around every corner thanks to our walkabout entertainment.

Gosh, we need a strong cuppa after all of that excitement! Stay tuned for more line-up announcements coming your way soon and check out the line up pages for full festival billing.

Get your tickets here and we’ll see you in July!