Get ready for the ultimate electronic extravaganza, from drum & bass to dance and techno to trance, this year’s knee-trembling lineup is stacked with acts for those craving the vibrations of the lower frequencies. 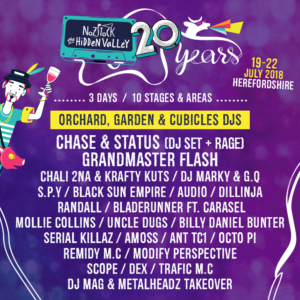 With just over a week go ’til our 20th birthday, here’s a DJ line up to remember for another 20.

And with one big long breath, we’ve got: Chase and Status and their cutting-edge beats and production techniques; Rap royalty and hip hop innovator Grandmaster Flash; founding member of hip-hop supergroup Jurassic 5, Chali 2na, alongside Krafty Kuts, the multi award-winning DJ and undisputed King of Breaks; Nozstock fave DJ Marky alongside Serial Killaz, one of the most sought after production duos in the industry; a DJ Mag Bunker and Metalheadz takeover brings a bag of bass heavy tricks welcoming respected and revered producer Dillinja and Hospital Records most eminent producer S.P.Y.; Randall loved by the public & the industry alike, as well as Amoss, Ant TC1 and special guest Octo Pi; Black Sun Empire representing the finest in dark and tech fuelled drum and bass alongside Audio, whose dilligency and creatively has garnered some serious respect; Bladerunner ft. Carasel one of the rising stars of Drum & Bass; Mollie Collins with her beautiful liquid vocals over brutal jump-up basslines; The ever popular Jungle guru Uncle Dugs; Remedy M.C. with his original, thoughtful and hard-hitting vocals; Billy Daniel Bunter a true pioneering icon of British underground music and culture; Modify Perspective with his liquid-driven productions; Scope whose fast paced, energetic sets send any dancefloor into a frenzy; Dex spinning tunes at Nozstock since the early days and Trafic M.C. with his intricate intonations and original prose.

Check out the line-up for more info…