Saturday & Sunday at the Bullpen 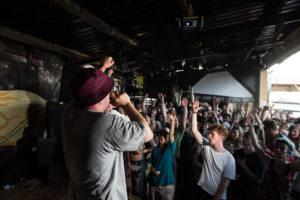 Saturday at the Bullpen will be bringing huge vibes to your day kicking off with the Durkle Disco takeover featuring none other than Marcus Nasty. The Bristol based record label is known for having bass at its very core, the label has since evolved to become a natural home for the new strains of instrumental bass-driven music coming from Bristol’s next unstoppable wave of production talent, and with just as much attention paid to MCs as the producers. Expect a huge four-hour takeover of The Bullpen Featuring Marcus Nasty. Undoubtedly at the forefront of one of the most exciting genres to emerge from London’s underground in recent years, Marcus is respected as one of the pioneers of the UK funky house scene as well as a long-time supporter of Grime which has been led by his highly-respected residency on London’s award winning Rinse FM, which he has now been a part of for over 10 years. He is joined by Boa Kusasa, 2 of the founding members of the BRSS, the crew behind Glastonburys ‘Babylon Uprising’ stage, Cardinal Sound, Bristol’s Dash Villz, Denham Audio, Juma, Koast, Mani Festo, Ngaio, Slowie and Unkey.

Not only are Gorilla Tactics joining up with Minirig for a Friday takeover but they are sticking around to add some more madness to your Saturday. With a mission to bring fun to anywhere, anyone or anything, they deliver every time. Catch them with their third takeover of the weekend featuring Bish, Scratch Bandikoot, Big Mon, TBM and DC. The Bullpen is looking like the ideal place to spend your Saturday afternoon.

Our next takeover see’s Subwork bringing there turntablists DJ Revrt, Cygnus Music’s Traxix and Garden Stage curator Tenz. Subwork are a record label featuring ground breaking electronic music, known for their jungle and unique 160bpm music which originates from Chicago. Expect a vibrant mixture of genres including Footwork, Juke, Electronic, Bass and 160. This takeover is sure to be an unmissable one that should be a ‘must-see’ over your weekend here at Nozstock.

The final takeover to tell you about for Saturday are the independent record label Played Out Records specialising in hip-hop, reggae, breaks, funk and soul. This takeover is sure to be a groovy one featuring Jpdl, Yogi Beats, DJ and Producer Blatant-Lee Sly, who specialises in anything with a hop-hop influence, and finally, Sublingual. We can’t wait to welcome these lot to the farm and would highly recommend paying a visit!

Sunday sees award winning Rumble In The Jungle back at the farm. After their emphatic takeover of the Elephants Grave last year, this year see’s them stepping in the Bullpen to showcase their talented list of DJ’s for a “SendIt Session”. Expect some serious vibes Rumble style from Remarc, Kelvin 373 b2b DJ Hybrid and Kamoh. The Bullpen is in for a heavy weight jungle session with Remarc, who is proclaimed as ‘a pioneer of Ragga Jungle’ due to his chopped up tracks for legendary labels such as Dollar, White House, Kemet, labello blanco and Suburban Base. Influenced by the underground free party scene and performing at some of the biggest festivals an events across the UK and Europe, Born-on-Road label owner Kelvin 373  will be going back-to-back with multi award winning Jungle Drum & Bass producer DJ Hybrid. This set will be one not to be missed. The last one from Rumble see’s Bristol based Kamoh take to the decks. The Bullpen is in for a Sunday treat with a line-up like this and we can’t wait.

And last but by no means least we’ve got all the wonderful weirdness of You’ve been Prango’d! Expect more of the same from our Bullpen residents. And we’ll be hosting out first ever Prango’s wedding. If you’re after a good time and whole heap of fun, this is the set for you.